In part two of this series looking at the best Brazilian players of all time, I will be taking a look at the finest Brazilian talents of the 1970s and 80s.

From the remarkable team of 1970 through to the abundantly gifted yet ultimately unsuccessful squads of the 1982 and 1986 World Cups, there are some truly extraordinary footballers to choose from. Again, if you think you know better then please don’t hesitate to express your views.

The talismanic captain of the historic 1970 World Cup team, Carlos Alberto continued where Nilton Santos and Djalma Santos left off, displaying an almost unprecedented ability as a playmaker from full back. He, like the Santos’, led the way for a new generation of full backs and was a major catalyst in the evolution in defending which took place in the 1970s and 80s as players such as himself became not only the last line of defence, but the springboard for powerful counter-attacks.

In the famous final of 1970 against the Italians, Carlos Alberto scored what has come to be seen as one of the greatest goals in the World Cup’s rich history. After some wonderful Clodoaldo-inspired interplay on the counter-attack, Jairzinho cut in off his wing, squared the ball to Pele who nonchalantly drew his man and squared for Carlos Alberto to emphatically fire home. It was a goal which summed up the nature of that team, a team which Carlos Alberto led with great aplomb.

As all of these 1970s selections were, Clodoaldo was an integral part of the World Cup-winning team of 1970. Equally comfortable sitting in a holding midfield role or playing further up behind the strikers, Clodoaldo’s versatility and composure on the ball knitted the midfield of 1970 together and allowed the likes of Rivelino, Jairzinho and Pele to flourish in attack.

Like Pele, Clodoaldo was a Santos legend, forming a part of one of the greatest domestic teams Brazil has ever seen. Playing alongside Gilmar, Zito, Pele and Orlando amongst others, Clodoaldo honed his talents and turned himself into one of the most tireless midfielders of his generation and was crowned “the new Zito”, a comparison of which he was more than worthy.

Roberto Rivelino, a Corinthians and Fluminese icon, has long been regarded as one of the finest creative midfielders the game of football has ever seen. Distinguishable by his curly mop and impeccably trimmed moustache, Rivelino was the creative heartbeat of Brazil’s team of 1970.

Despite his superb wing play and elegant nature on the ball which was such a feature of all the teams of which he was a part, it is Rivelino’s flair and ingenuity for which he has been most fondly remembered. The creation of the Elastico, a trick now often used by the likes of Ronaldinho and Cristiano Ronaldo, ensured that Rivelino left a lasting legacy on the game, a legacy reminiscent of the inventive, individualistic and unique way in which he played football.

Another member of Brazil’s World Cup squad of 1970, the Rio-born Jairzinho was arguably the finest, most electrifying member of that abundantly talented group of players during the competition. Playing for the most part as a right winger, Jairzinho was, like Garrincha before him, a Botafogo legend and an audaciously gifted presence in the Brazilian sides of which he was a part.

During the 1970 tournament Jairzinho scored in each and every game, finishing with seven goals and a reputation as one of the world’s best players. He went on to play for Brazil until 1982 before finally calling time on a glittering eighteen-year career in the yellow and green of his home country, retiring as one of the most revered Brazilian players of all time.

Perhaps not the most glamorous member of the class of 1970, Gerson was patently one of the most important. His willingness to sit in midfield alongside Clodoaldo allowed Pele, Jairzinho and Rivelino the optimum creative freedom with which to take apart opposition defences, something they achieved on an alarmingly regular basis.

Gerson was the link between defence and attack, a studious passer of the ball and a tactically astute player who was integral to holding Brazil’s many components together as one efficient footballing machine. His influence was noted during the 1970 final, a game in which Gerson was given the man-of-the-match award for scoring the third goal of the match to make it 2-1 to Brazil and for the way in which he effortlessly orchestrated so many of his team’s attacks as they played their way into the history books. 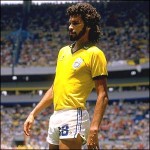 Socrates, perhaps the ultimate bohemian icon in sporting history, is, along with Zico, surely one the greatest Brazilian footballers never to have won the World Cup during his career. Despite being a part of two supremely talented squads in both 1982 and 1986, football’s ultimate prize continually eluded Socrates, but that in no way diminishes his contribution to the game. As a chain smoker, left-wing political activist and student of philosophy, Socrates was not only a footballer but a liberal figurehead who challenged the Brazilian military junta of the time and promoted the values of democracy wherever possible.

On the field Socrates was remarkably gifted, a playmaker with the ability to read the game more quickly and more thoroughly than anyone else. He was, particularly at club level for Corinthians, renowned as a clinical goal scorer, a player who could pass and shoot equally well off either foot and terrorise defences with his vision and unrivalled instinct for the game. A true footballing and political hero. 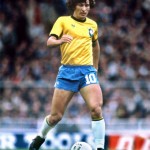 An overview of Zico’s career has a remarkably similar feel to it as that of Socrates. A hugely gifted player (Pele believes him to be the second greatest player in history after himself), Zico scored a goal every 1.38 games for his country and was an effervescent talisman in the ’78, ’82 and ’86 World Cups, none of which Brazil were able to win despite possessing some of the best players the country has produced.

Domestically Zico established himself as one of the most potent forwards ever to have played in the Brazilian championship. He scored 123 goals in 212 appearances for Flamengo between 1971 and 1983, picking up the South American Footballer of the Year award in 1977, 1981 and 1982 before claiming the World Footballer of the Year award in 1983, a prize very much befitting his substantial talents.

Oscar was, like Zico and Socrates, part of that hugely talented generation of Brazilian players which tragically failed to win the world title their abilities surely deserved. During the ’78, ’82 tournaments Oscar was the central defensive lynchpin of what were generally sides based around attacking prowess and, alongside the likes of Luizinho and Leandro, gave the side a solid base which allowed those further up the field to attack without concerning themselves with too much defensive responsibility.

During his sixty appearances for Brazil Oscar showed that great teams are built as much around a sound defence as a devastating attack and, although an unsung member of the Brazilian sides of which he was a part, allowed the more visible talents of Zico, Socrates and Junior to blossom.

Junior, an adaptable defender or defensive midfielder, made his name with Flamengo in the mid-1970s and went on to represent his country on 74 occasions, featuring in the 1982 and 1986 World Cups.

An unfussy and functional player, Junior represented the shift in the philosophy of Brazilian football that occurred gradually over the course of the 1980s and early 1990s. He was a combative player who was quick to realise (probably because of the time he spent in Italy with Torino) the importance of European-style defensive organisation, something Brazil eventually adopted and used to good effect during their triumph in the 1994 World Cup, just two years after Junior’s international retirement.

Despite a relatively short international career, Falcao left his mark on the game and is remembered as one of the finest midfield players of his era. In combination with Socrates, Falcao was a huge creative influence in both the 1982 and 1986 World Cups, but was another member of this most talented of generations to finish his career without having held aloft football’s biggest prize.

Falcao was also one of the first Brazilians to have a successful career in Europe, playing for Roma for five seasons and guiding them to the Serie A title in 1982-83. After his retirement as a player, Falcao was appointed as manager of Brazil in the aftermath of the 1990 World Cup but only lasted a year in the hot seat, the team’s performances showing little improvement under his leadership. In spite of his poor showing as a manager, Falcao remains fondly remembered as a midfield player of huge ability and great composure, one of the Brazilian greats.