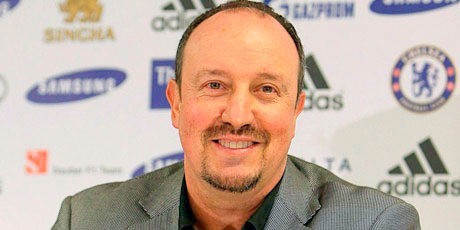 Benitez is expected to leave the club once his contract expires after the end of the season and has been tipped to replace Madrid manager Jose Mourinho, who is thought to be looking for newer pastures elsewhere.

In an interview on Radio Nacional de Espana, the Spaniard professes his love for Los Blancos and spoke about how his success at Liverpool had made life difficult for him at Stamford Bridge.

Benitez joined his home-town club at the tender age of 13 and went on to play for the reserve team before becoming a part of then manager Del Bosque’s coaching staff during his time at the Santiago Bernabeu.

Knowing that Jose has three years left on his Madrid contract, Benitez was reluctant to discuss anything about his future plans but insisted that Madrid holds a special place in his heart. He said:

“I have a contract (with Chelsea) until the end of the season and I am going to do everything possible for this club to have the best success.”

“Real Madrid have a determined manager with a contract and this deserves respect. As a manager, you always have your sweetheart. I have a link with the fans and they have treated me well.”

The former Liverpool boss has also expressed his interest in taking over from Vicente Del Bosque as head coach of Spain when the 62-year-old ends his association with La Roja.

Benitez was a highly successful manager in Spain, winning two La Liga titles and a UEFA Cup with Valencia. He also masterminded Liverpool to a Champions League triumph in 2005 and an FA Cup success the following year.

He has been the subject of barrage of abuse and strong loathe from Chelsea fans since taking up the job in November. Despite knowing that his success at Merseyside is the central reason why the Chelsea fans have not taken to him, he is determined to keep working hard with utmost professionalism and aims to achieve success with the Blues.

It can’t just be a coincidence that Benitez is eyeing a position that Mourinho has just vacated. Before coming to Chelsea, it was Rafa that was appointed as a replacement for the special one at Inter Milan.