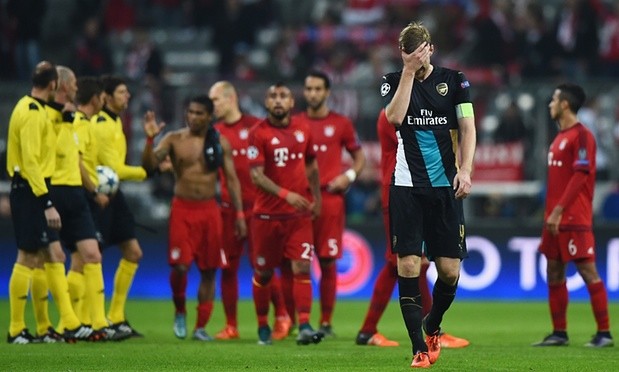 Arsenal have never failed to qualify for the Champions League knockout stages under the tutelage of Arsene Wenger.

However the Premier League giants are now under severe pressure to turn it around in Europe. The Gunners were blown away by an inspired Bayern Munich side in a must win game.

After their defeats against Zagreb and Olympiakos, Wenger was under pressure to win the next two group games. Arsenal responded with a stunning 2-0 win against Bayern Munich at the Emirates, but Pep Guardiola delivered on his promise and dismantled the Londoners in Munich yesterday.

The former Barcelona boss promised that Arsenal will not be able to attack at the Allianz and that Bayern would have their revenge.

Here at Soccerlens we look at the three prime reasons behind Arsenal’s devastating defeat against the German champions Bayern Munich.

There are few teams who are as good as Bayern Munich, let alone better. And when you are an underdog visiting the Allianz arena, one of the first things to take care of is the defensive organisation of the side. It seemed that Arsene Wenger forgot to mention that in his pre-match talk with his players.

The Gunners were embarrassing at the back and made it easier for Bayern to take them apart. The Germans pressed relentlessly and punished the away side ruthlessly for every mistake they made.

Much has been said about Arsenal’s title challenge this season, but rarely a team wins something of note with a defence like that.

Lack of planning to deal with injuries

It’s the same story every season. Arsenal fans love to blame their injury issues for another failed season.

Arsenal were without the likes of Rosicky, Arteta, Wilshere, Welbeck, Chamberlain, Walcott, Ramsey, Bellerin, Koscielny and Ospina for their game against Bayern Munich.

Granted that they have been unfortunate with injuries but It is unacceptable how Wenger gets away with his poor planning year after year. The Arsenal manager had hundreds of millions sitting in the bank last summer and decided against adding to his squad.

Although his reasoning is understandable that it was not possible to upgrade on his squad, he could have easily added 2-3 players as squad depth. (At this stage almost anyone can predict Wilshere, Ramsey, Walcott, Chamberlain and Rosicky to pick up injuries at some point of the season)

Bayern are the best team in Europe

For all the mistakes Arsenal made, it cannot be ignored that Bayern Munich are simply the best side in Europe at the moment.

On current form, the German champions are good enough to dismantle any side. If they can sort out their rare dip in form from time to time, they are a good bet as far as winning the Champions League is concerned.

Arsenal were terrible defensively but credit where its due, Bayern were efficient and ruthless. The likes of Alaba and Thiago were exceptional all night and ran rings around the hapless Arsenal midfield.