After the final whistle blew on events at the Emirates on Wednesday night, much of the talk was of how the Bayern Munich machine dominated Arsenal in their own back yard. Much chat was of the Bavarians 863 total passes compared with the Gunners 222 and a second half possession dominance of 88% would suggest the visitors had total control over their hosts. But do the statistics tell the true story?

Much of the pre-match talk was how Arsenal were going to keep the reigning European champions quiet and to stop Pep Guardiola’s men from gaining control of the game through their high-pressing quick passing system.

In the final hour before kick off however, news filtered through that Arsene Wenger had gone with the surprise inclusion of Yaya Sanogo up top in place of Olivier Giroud and his off-field misadventures. It seemed Sanogo – who had impressed in the North Londoner’s 2-1 FA Cup victory versus Liverpool three days prior – and his gangly and pacy style could trouble die Roten and a defence that had only conceded 9 goals in 21 Bundesliga outings this season.

The general consensus was that if Arsenal had a chance versus the dominant Bavarians, Arsene Wenger’s men had to play a high pressing game to prevent the game getting away from Arsenal. Indeed the Gunners came out of the traps from the off and inside ten minutes they had won a Penalty after Mesut Ozil had jinked past Jerome Boateng before being taken out.

In truth that was Ozil’s best contribution after having started brightly. The German’s languid style most responsible for a poor spot kick that lacked power and Neuer was able to reach back and palm away.

Despite the setback Arsenal had still asserted themselves superbly. Indeed in the first 15 minutes the Gunners had 61% possession. Sanogo was a constant menace forcing a smart save from Manuel Neuer. The Frenchman also lifted a sublime ball from the centre circle to find the onrushing Alex Oxlade-Chamberlain. The Ox was terrifying both Dante and Boateng everytime he came forward whilst Sanogo’s lanky frame was difficult to handle.

Then in six minutes Arsenal’s fortunes were halted and the game swung dramatically in Bayern’s favour. The loss of Kieran Gibbs was tough for the Gunners to bare. Whilst Nacho Monreal is more than an able player, for a left back the Spaniard is all too often found wanting on the left wing and with Philipp Lahm and Mario Gotze to contend with was simply not able to close the gaps quick enough, which led to the David Alaba’s missed penalty, but more importantly the dismissal of Arsenal’s stopper.

Whether you agree with Wojciech Szczesny’s sending off or not, it is difficult enough to press high, defend and counter attack when the opposition have a man advantage – let alone that team being Bayern Munich and a Pep Guardiola Bayern Munich to boot – and from then on the Gunners simply did not have the chance to even match the Germans.

Mathieu Flamini and Jack Wilshere continued to snap gallantly at the heels of Javi Martinez and Thiago Alcantara but Arjen Robben was beginning to receive the ball more often as was Toni Kroos who began to find himself free on the edge of the box. Nevertheless, Arsenal got to half time without conceding.

Guardiola should be commended for bringing on Rafinha in place of Boateng. Boateng had been walking a tight rope on a yellow card but even so to take away his centre back for an offensive right back-cum winger was a bold move. However it was soon clear to see it was a smart move. Monreal was having to contend with Thiago, Lahm, Kroos and now Rafinha and the cracks were starting to show. 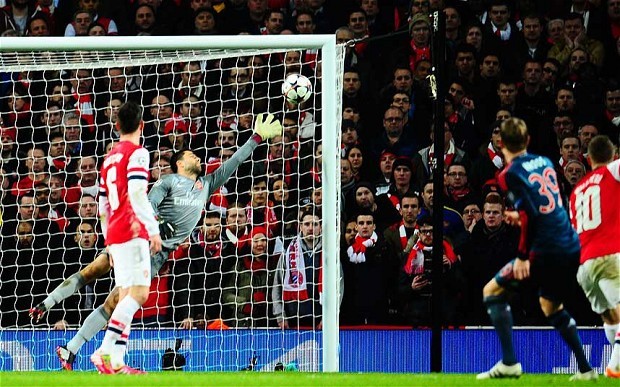 Soon enough Bayern had the hammer down fully and by the time Toni Kroos gave the visitors the lead with a sweeping, curving drive, Munich had reached 70% possession.  By the time the ever reliable Thomas Muller had notched a second – and potentially vital – goal Arsenal had dropped to just 12% with the ball. It was a clear cut story of sheer dominance then. Correct? Well no.

As the side with a man down, the Gunners had a monumental task to keep Bayern out and therefore elected to let the Germans have the ball as much as possible and dominate. They had no choice. Even Mesut Ozil had to drop back deep into his own area and he is not noted for his defensive abilities.

Despite the offensive monopoly Bayern held, Arsenal still defended manfully with Per Mertesacker and Laurent Koscielny frequently making crucial blocks and the raucaus atmosphere at the Emirates told the tale of the heart that was exhibited.

Each time Bayern attacked across the penalty area they allotted a minimum of 10 passes per attack. Statistically it was going to damage the Gunners. Kroos was the star of the show undoubtedly with 172 touches and a pass success rate of 97% but remarkably Lahm had 140 and a % of an astonishing 99. But then he was never challenged for much of the second half. The Gunners could not get out to try to get hold of the ball. They were in their bolt holes.

The Arsenal boss’s comments post-match would seem to mirror that. Speaking to the BBC, the Frenchman spoke of his frustration after the red card ‘killed the game’:

“The referee made a decision that killed the game. Our keeper went for the ball, he touched Robben, who made more of it. Robben has enough experience to know to make more of it. Overall I thought Bayern made a lot of every single contact. We are not used to that in England.”

“There were fouls given today that usually are not given in the Premier League, but it’s different rules and we have to accept it. The game was, until then, top quality, and in the second half it was boring for neutral people. It was one-way traffic.”

It is then unfair to suggest Arsenal were taught a ‘lesson’. The assumed one sided nature of the result that many media and press have labeled the performance by does not tell the whole picture. Football in it’s own nature is made up of ‘ifs’ and ‘maybes’ and for Arsenal last night at the Emirates versus a Bayern side that very few gave a chance against, that was very much the case.