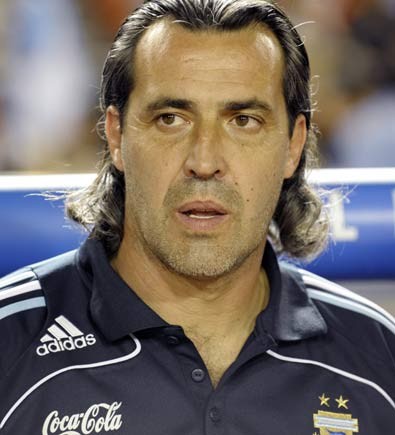 Sergio Batista, the man who has filled in for Diego Maradona since his contract expired as Argentina manager, has been given the role on a permanent basis.

Batista has signed a contract keeping him at the South American country until after the 2014 World Cup, held in Brazil.

“I’m fulfilling a dream, one of my great objectives,”

During his temporary spell in charge, Batista triumphantly led his side to a 4-1 victory over World Champions, Spain.

He added a win against the Republic of Ireland to his tally but surprisingly lost out in a friendly versus Japan.

As a player, Batista represented a range of Argentinian club sides, making his mark at Argentinos Juniors for whom he represented 272 times, netting 25 goals from the defensive midfield position. During his time there, he was called up to the national side, where he went on to make 39 appearances for his country.

As a manager, Batista has a reputation for moving around a lot. He has managed seven teams in as many years, starting at Belle Vista back in 2000. In 2007 he secured the joint role of Argentina Olympic Team Manager and managing the Argentina U-20s.

Batista’s first official game in charge takes place on 17th November, where they host Brazil in a neutral venue in Qatar. Batista will manage the side in his first major tournament, the Copa America, which takes place in his native Argentina next summer.

Although Batista may justify opinions by their demolishing of Spain, fans will voice concern at his lack of silverware. Batista’s only trophy in 10 years as a manager came when his Olympic side won the 2008 Beijing games. His side blew away the tournament mainly because of their range of talent. Lionel Messi, Sergio Aguero, Juan Roman Riquelme, Javier Mascherano and Angel Di Maria all played in this tournament

No matter how Batista performs, a lot of minds will be confident for a successful outcome due to the pure talent Argentina have on show. So whether it’s his managerial skills or the world-class players Argentina boast, a successful spell for Batista is sure to be in store.