A mouth-watering tie at Camp Nou on Wednesday sees Pep Guardiola return to face his former side for the first time as the Spanish and German giants go head-to-head in the first leg of their UEFA Champions League quarter-final.

The Bayern Munich head coach rested a number of players in their loss to Bayer 04 Leverkusen on Saturday with the Bundesliga title already won.

Earlier in the day Barcelona had hammered Córdoba 8-0 to remain top of La Liga and on course to win the treble.

Luis Enqrique has a full bill of health for the first leg.

Pep Guardiola is not so lucky, with a long list of injuries and a few key ones heading into the trip to Spain.

Left-back David Alaba will be lucky to play a game again this season, whilst Holger Badstuber is out for the season.

Javi Martínez has only just made his return after being out for most of the season, it would be a surprise to see the Spaniard feature in this one.

Arjen Robben is out for the season with a calf injury whilst Franck Ribery is a doubt for this match having been troubled with an ankle injury.

Robert Lewandowski is also a doubt, with a broken nose. 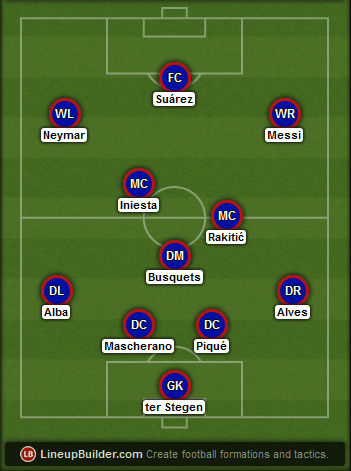 This is Luis Enrique’s favourite lineup in the Champions League this season, with Marc-André ter Stegen starting all of their games in this season’s competition, ahead of Claudio Bravo, who starts the league games. Javier Mascherano often plays centre-back in this competition too. The front three are the best in the world right now. 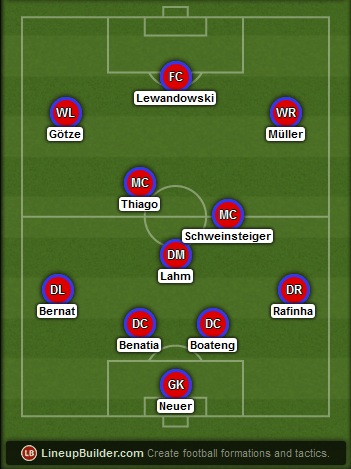 Will Pep Guardiola play a more defensive lineup? Thomas Müller and Mario Götze do their defensive duties from the front and Robert Lewandowski will close down Barcelona players in possession in their own half. Former Barcelona player Thiago Alcântara is set to face his former club and Philipp Lahm should remain in front of the back four with the defensive injuries they have, instead of being reverted to his former right-back role where he has played big games.

Luis Suárez vs Jérôme Boateng
The German centre-back appears to have improved since winning the World Cup last summer but he and the Bayern Munich back four are prepared to face a front three nothing what they’re used to face in Germany. This defence shipped three goals in Porto which will surely make Bayern fans nervous on Wednesday. Luis Suárez is in fine goalscoring form of late and we think he’ll have his name on the scoresheet in this one too.

Lionel Messi vs Juan Bernat
Bayern Munich are down to their second choice left-back but the Spaniard at least has pace to keep up with Lionel Messi. Whether he can avoid being dumped on his butt and prevent the Argentine craeting chances for teammates and himself is another matter. He can also be used to draw defenders to free up Luis Suárez and Neymar in and around the penalty area.

Thomas Müller vs Jordi Alba
The Barcelona left-back plays like a left winger a lot of the times, and whilst he can afford to in many La Liga matches, Jordi Alba has to be careful of Thomas Müller in this one. The German forward is very good at finding free space, and often gets himself in positions to cut the ball back from inside the penalty area on the byline. Watch for the 2010 World Cup Golden Boot winner to drift inside to find space against a Barcelona side that hasn’t always looked secure when put under pressure this season.

4 – Bayern Munich are appearing in their fourth straight Champions League semi-final. Only Barcelona (6) and Real Madrid (5) have appeared in more consecutively.

13% – Barcelona have won only one of their eight previous matches versus Bayern Munich in European competitions (D2, L5).

27 – Thomas Müller became the all-time top German goalscorer in Champions League history in the last round.