Everybody loves Barcelona, I know I do! Well, everybody except the Real Madrid fans I guess, but they might also be impressed by Barcelona’s sexy attacking football under the guidance of coach Pep Guardiola.

I have always been an admirer of the club since the days of Johan Cruyff but I have to say that today’s Barcelona is playing the best football I have ever seen in my life (I’m 31 years old by the way and I’ve been watching football since I was around 4 or 5).

I am also known as a Football Manager addict, you surely know the simulation game that allows every football fan to take charge of a club and drive it to glory or get sacked if not. Although I like to manage lower league clubs, which I do in Football Manager 2011 as well since I took charge of Blue Square South club Vauxhall Motors FC, I am trying to give my teams some of the Barcelona spirit.

You can never replicate Barca’s style with a lower league side though so I tried to make a Football Manager 2011 tactic that would resemble the real Barcelona and the only way to build that tactic was to take charge of the Blaugrana themselves!

I started the process during pre-season and the foundation was the tactic that I am using in my Vauxhall Motors game. Before you start laughing I have to state that the tactic I’m using in the lower leagues is attacking but not as attacking and creative as the one I ended up using at Barcelona. The first changes were made in the formation, the one I am using at Vauxhall is a flat 4-4-2 but for Barcelona I adopted Guardiola’s formation as you can see from the screen shot below. 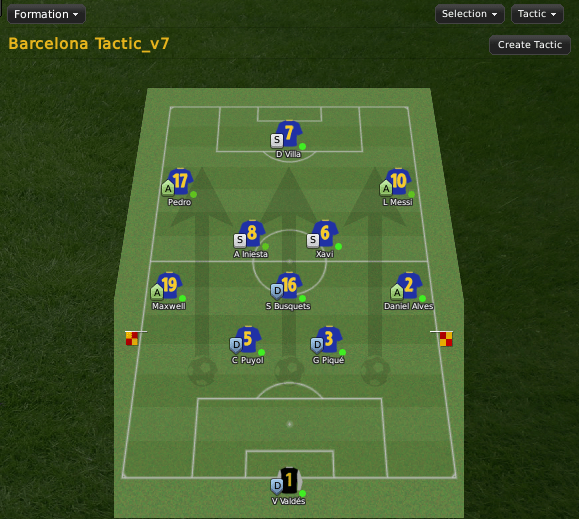 Let me describe in a few words each player’s role in the formation:

Victor Valdes -Sweeper Keeper – the man in charge with saving shots but also with sweeping behind the defense, that is if anything gets past Pique…

Daniel Alves -Wing Back – a tornado down the right flank, providing interceptions high up the pitch, passes and also goals now and again.

Gerard Pique -Ball Playing Defender – an unusual centre back, a man with good technique that gets involved in the attacking build-up and also scores when you would least expect him to.

Carles Puyol -Limited Defender – just a centre back really, but a damn good one. He’s the team captain as well.

Maxwell -Wing Back – same duties as Daniel Alves but not as attacking.

Sergio Busquets -Defensive Midfielder – the man who gets the ball back and passes it quickly to Xavi. He did pretty well in attack as well in some games, great potential.

Xavi -Deep Lying Playmaker – he’s Xavi, that’s all! The team’s playmaker, the man who never misses a pass and also manages to score a few.

Andres Iniesta -Central Midfielder – a real genius in the middle of the pitch, a creative player that provides some killer passes and some fabulous goals. I have employed him on the left wing on a few occasions but I think that the place that suits him the most is in the middle.

Lionel Messi – Inside Forward – the greatest player in the world,  a tremendous talent that can decide a game all by himself. I have put him in different roles in attack but eventually left him as an inside forward, sometimes on the right flank and other times on the left.

Pedro – Inside Forward – a speedy player that can do some real damage on counter attacks. I often set him to switch flanks with Messi during the games to confuse the opposition defenders.

David Villa – Complete Forward – the man with the killer instinct, a great finisher but he also participates a lot in building the attacks.

The next important thing in setting up a Football Manager 2011 tactic is the team instructions, the changes made there shape the way the team would be playing on the pitch. As you can see I tried to replicate Guardiola’s approach in terms of strategy, philosophy, passing or pressing but I also went into more detail and set up the corner kick and free kick taking strategies to match the real-life Barcelona. The only thing that might be a bit different is the tempo, it might be higher in my tactic than the real Barca but that gave the best results in the game and made the matches a bit less boring. 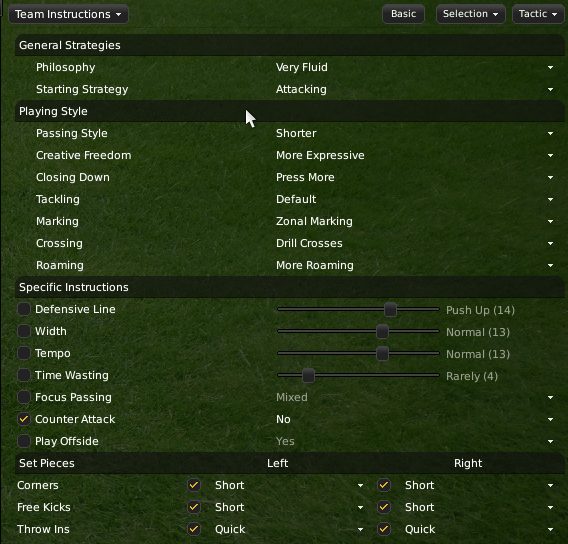 Building a good Football Manager 2011 tactic is a process that takes time and a lot of tweaking. The first version of the Barcelona tactic was employed during pre-season but then I have made several changes before finally settling for version number seven, just in time for the El Clasico against Real Madrid. As you can see from the screen shot below the results were quite rewarding despite the continuous tweaking that went on under the hood: 20 wins and 2 draws in 22 competitive games. In the Primera Liga we played 13 games, won 11, drew 2, scored 41 goals and conceded just 6.

Click on the image above to see the full-scale view of results.

We have shown good attacking football in all of those games, but the real test for the tactic was the eagerly awaited derby against arch rivals Real Madrid. I made the final changes to the tactic a game before that but I was still not sure that it would ensure a victory against Los Blancos.

The first half was satisfying, we took the lead through David Villa who latched on to a delicious through ball from Andres Iniesta before coolly slotting home and Real Madrid were unable to create any clear chances before the break. Unfortunately Cristiano Ronaldo made it all square two minutes after the re-start following a corner kick and some weird marking from my defenders.

The result was unfair, Barcelona were certainly looking like the better side! Lionel Messi did justice though, he scored two beautiful goals to round off flowing team moves and the crowd at Camp Nou was ecstatic! You can watch all the goals below:

Click on the above image to see a full-size image of the match statistics.

I had to make three changes during the match against Real Madrid: Eric Abidal for injured Puyol, Javier Mascherano and Adriano for tired Andres Iniesta and Maxwell. The average positions analysis shows how the team acted during the match, pretty high up the pitch and very compact (just like the real Barcelona). 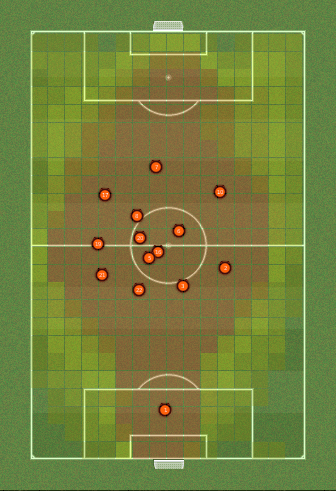 One of my main concerns was how to find the ideal role for Lionel Messi, it would have been a huge shame to waste such a talent. I seem to have found the right place for him after all, he scored 19 goals in 20 appearances, but the most pleasing thing was that no less than 13 different players had found the way to the back of the net during the 22 competitive games that I played.

You are welcome to try the tactic yourselves and provide feedback, criticism and suggestions on how to improve it. Download the Barcelona FM 2011 Tactics here.