Barcelona are confident the two-year transfer ban imposed on them will soon be lifted, and have targeted David Luiz of Chelsea yet again.

The Mirror reported couple of days back that Barcelona officials are now so convinced of at least a temporary reprieve and hence they’ve started actively negotiating for players.

The news has been carried on in Spain, with both Mundo Deportivo and Sport reporting on it, citing the Mirror as the primary source.

The Spanish media basically are repeating the lines of Mirror. It says that central defence remains one of the major concerns for Barcelona and should the transfer ban is lifted, they would go for him.

Luiz divides opinion among the fans. Jose Mourinho this season has used him as defensive central midfielder, especially in Europe, but has made only 15 league starts this season. 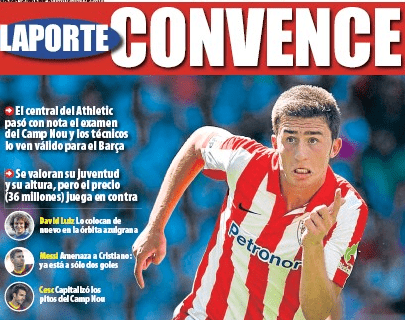 The Brazilian is adventurous and superb going forward but his defensive abilities doesn’t convince everyone completely. Luiz, who has been a long term target of Barcelona, could be a fantastic addition for the Catalan giants, but is he the right man to replace club legend Puyol?

Barcelona are also thought to be interested in highly rated young French defender Aymeric Laporte but has a €36m release clause, while Athletic Bilbao are known to be very tough negotiators.