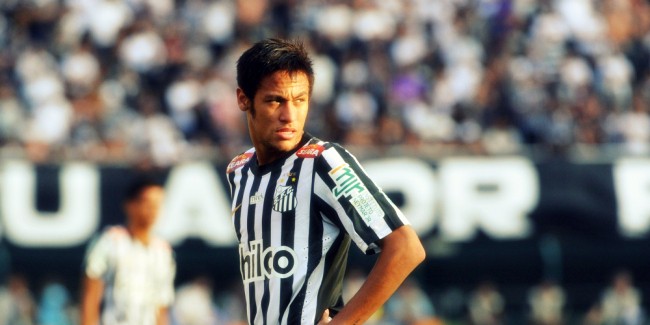 Brazilian newspaper O Globo has reported that after much resistance, Neymar will indeed be moving to Barcelona after the 2013 Confederations Cup. The tournament is expected to be held from 15th to 30th June in Brazil – which means Neymar will be heading to the Catalan club in July.

In Spain, daily newspaper El Mundo Deportivo are also reported that Barcelona has bid for the Brazilian prodigy. Although it seems they might have picked up the story from O Globo.

A source close to the attacker, as claimed by the Brazilian newspaper, Neymar has already signed a ‘statement of commitment’ with Barcelona. Now Neymar will have to sign for Barcelona in July, after the Confederations Cup.

Neymar will be a great signing for Barcelona and he will fill in one of the holes that were exposed in their 2012-13 campaign. Although Barca marched to a comfortable La Liga win but their escapades in Europe were barely a shadow of the Pep Guardiola era.

Brazil national team coach Luiz Felipe Scolari was present in Barcelona’s 2-1 win over Real Valladolid at Nou Camp this Sunday. He watched the game seated next to Carlos Alberto Parreira, Dani Alves and Adriano. Neither of the teams featured a Brazilian player in the game.

Santos and Neymar have not been subtle in denying the rumours of his move. Club president, Rodrigues Odilio has already admitted that the market is stronger than the will of the club. Coach Muricy Ramalho was even more direct:

“It will be a big thud. It seems that this time, the thing is strong. The club will feel much but that’s life.”

Muricy Ramalho declared in March that Neymar’s future destination will be Barcelona. He thought that Neymar should follow the footsteps of the greatest of the Brazilian forwards who donned the Barca colours – Romario, Rivaldo and Ronaldo.

According to O Globo, Barca representatives made an offer of €14 million two weeks ago but now they have raised their offer to €17.5 million. Santos want to keep Neymar until 2014 but if they know that if they let these offers pass, Neymar will be available for free in 2014.

Santos knows that Neymar may be their rarest gem but he is definitely leaving in 2014 – his contract ends in Summer 2014 but clubs will be allowed to sign a pre-contract with him from January, which would allow them to leave the club for free in the summer.

Santos understands that they must part ways with Neymar now and get a good deal for their gem while they still have the chance. Barcelona will buy 100% of the rights of the player; buying out DIS and Teisa as well.

When asked to comment on the Neymar saga, Lionel Messi seemed delighted with this move. He said:

“I don’t know if in the end he [Neymar] will sign with Barca, only he knows that.

“I know this is a player who presents very different individual solutions. It is clear that for Barcelona, it would be a wonderful signing.”

According to Mundo Deportivo, the ‘statement of commitment’ signed between Neymar and Barcelona, includes a clause that if Neymar goes to any other club than Barca, Santos will have to pay a €40 million penalty to the Catalans.

It is also evident that even Neymar, himself, is also in good understanding of the circumstances. He told the press:

“When I renewed until 2014, no one said anything, no one complained. I want to fulfill my contract, but also look the best for all parties.”

The directors of Santos have planned to hold a meeting today and it promises to be a decisive meeting in deciding the future of Neymar.

Amidst all this, Mundo Deportivo also reported that Real Madrid have sent a middleman to Brazil who is actually a former AS journalist.

Is there a twist in the tale or Neymar to Barcelona is all set and done? Let us know with a comment below.