Daniel Agger is facing an uncertain future at Liverpool. The 29-year-old defender dropped down the pecking order at the club last season behind Mamadou Sakho and Martin Skrtel and is likely to slip further down the list, with Liverpool adding yet another central defender in Dejan Lovren from Southampton this summer.

This week, Catalan newspaper Sport have been primarily focussing on Agger, claiming that Barcelona are looking to sign a ball-playing defender to fill the void left by Carles Puyol. PSG defender Marquinhos is thought to be their primary target but the Catalan club are keeping their options open, with the likes of Agger, Vermaelen, Blind and Vertonghen are considered as back up options. 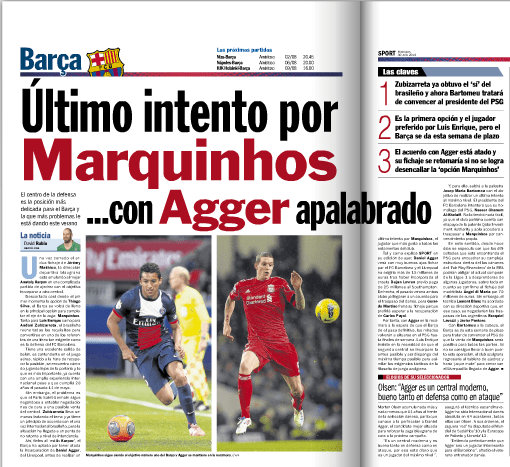 Early this week, Sport claimed that Barcelona are quite hesitant in pushing through the deal, keeping in mind Agger’s poor injury record. However, for the last couple of days, they have been reporting that Liverpool are willing to sell for him for around €15m, and that a deal is as good as done (Barcelona are said to have completed a personal agreement with him), albeit Agger is seen primarily as a back-up option for Marquinhos and Barcelona will only sign him, should they fail to land the former Roma defender.

Danish football manager Morten Olsen said that Agger is a typical ball-playing, stylish defender who is equally good in defence and going forward, hinting that the Denmark international could be an ideal fit for the Spanish giants.

Agger joined Liverpool under Rafael Benitez in 2006 and since then has been one of the pillar of strength for the Reds in defence. However, it seems like his time is up at Anfield.