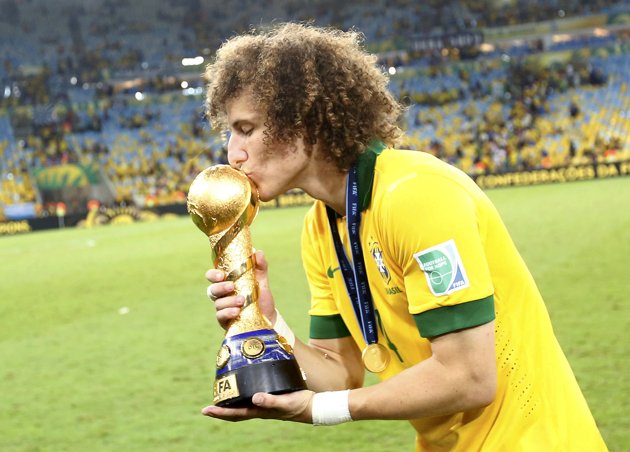 La Liga champions Barcelona have so far failed in their quest to procure any of their summer targets in defence.

Liverpool’s Daniel Agger, Manchester City’s Vincent Kompany, and Chelsea’s David Luiz are all said to be on the Catalan giants’ shortlist. However, their opening bid for Agger was recently rejected, they are yet to make an official approach for Kompany, and their interest has been snubbed by Chelsea for Luiz.

Last season, David Luiz was the London side’s standout player of the 2012/13 campaign. While being utilised in both defence and midfield, Luiz showed he’s equally adept at many roles.

He added to his seasonal honours by winning this summer’s Confederations Cup for Brazil pictured.

‘Luiz is a great player. The problem is not whether he wants to come, but that in the end you have to get away from Mourinho — and that is not going to be easy. The idea of facilitating David Luiz to Barca would not pass through Mourinho’s head, and even less if it is to strengthen us. It is more than difficult for us, almost impossible.’

Real Madrid and Barcelona are notoriously long-standing rivals in the Spanish La Liga – which was made even more fierce during Jose Mourinho three years at the helm of Madrid. He’s already said he has no plans to let the Brazilian international leave Chelsea this summer, and has so far rejected the advances of the Champions League semi-finalists.