London rivals Chelsea and Tottenham go head-to-head at White Hart Lane on Saturday in an early season indicator of where each side are in their respective ambitions this term. The Blues are undefeated and top of the pile after seven games, whilst Spurs have shown good form of late in their pursuit of Champions League football. Added spice will be dished up given that Andre Villas-Boas takes on his former club, with a point to prove.

Tottenham are in a rebuilding phase after the axing of Harry Redknapp and the purchase of a raft of new players. The first couple of games say disappointing results for the north London club, with draws against Norwich and West Brom putting AVB under pressure straight away. However, an upturn in performances and results has seen Spurs win their last four games in the Premier League, with a 3-2 win against Manchester United at Old Trafford the standout showing of the bunch.

Luka Modric’s departure to Real Madrid has been negated by the purchase of Moussa Dembele, who has added poise and drive to the club’s midfield. Jan Vertonghen’s addition has added versatility and assurance to the team’s backline, whilst Jermain Defoe has been rewarded with a run in the team and is on form. Spurs need to get a positive result from this traditionally tough fixture to fully state their claim for a top four finish, and Villas-Boas will be keen to prove his former employers wrong in this White Hart Lane grudge match. 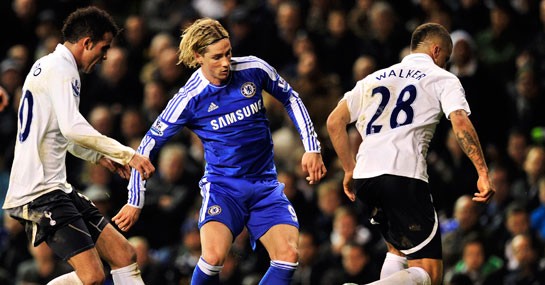 Chelsea’s FA Cup and Champions League success from last term has given Roberto Di Matteo the chance to manage the club on a permanent basis, with summer reinvestment meaning that the west Londoners’ mission this season is the Premier League title. The Blues have looked strong in the first seven games of the campaign, firing their way to the top of the table with six wins and a draw. The game against Spurs will be the first real test of the Blues’ title credentials, and a win away to a fellow top four candidate would put a stake in the ground.

John Terry has accepted a four-match ban from the FA for his racist abuse of Anton Ferdinand, and the visitors will need the likes of David Luiz and Branislav Ivanovic to stand up in the absence of their skipper. The side’s attack has been revamped with the additions of Eden Hazard and Oscar, who have combined with Juan Mata in support of Fernando Torres in offence. Chelsea were criticised for their defensive tactics last term, but this season the team have shown that they are a force to be reckoned with.

AVB vs Roberto Di Matteo, Tottenham vs Chelsea; it promises to be a tightly-contested match-up and an early season indicator of where each team are at in their quest for a successful campaign.