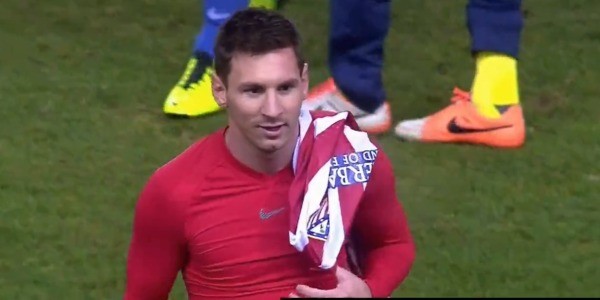 Atletico Madrid and Barcelona played out a highly entertaining 0-0 draw in the Spanish capital, with the result leaving the duo still locked on equal points at the top of La Liga.

Barcelona predictably had the lion’s share of the possession, but couldn’t find the breakthrough to take them clear at the top of the league, with Leo Messi failing to provide the cutting edge in what was a gripping encounter.

Reported Arsenal and Chelsea target Diego Costa worked hard up top for the hosts, and could have snatched all three points for Diego Simeone’s side had his falling volley not shot straight into the midriff of keeper Victor Valdes.

Real Madrid will arguably be the happiest after tonight’s result, with ‘Los Blancos’ able to make up two points on their rivals with a win tomorrow at Espanyol.

Barca manager Tata Martino left star duo Neymar and Leo Messi on the bench for the first half, the latter coming on as a half time substitute. The Argentine was unable to find the net however, with the match typified by terrific defensive play from both sides.

In a gritty first half, it was the home side who showed the most attacking invention, with the industrious Arda Turan putting in plenty of crosses in an attempt to utilise Brazilian striker Diego Costa’s aerial prowess.

Barca winger Pedro headed just over for the visitors, and Costa was just off-target with an effort from Miranda’s flick on as the two sides probed for an opening.

Both Neymar and Messi were unleashed by Martino in the second half, but neither were able to unlock the stubborn Atletico defence.

Messi sent a deft header agonisingly wide, before the 26-year-old weaved through the Atletico back-line, but his effort was saved well by Courtois.

Diego Costa, who is just one goal behind Cristiano Ronaldo in the La Liga goal-scoring charts, looked a threat up front, but was prevented from adding to his tally by the the alert Valdes, and the impressive Gerard Pique and Javier Mascherano in the Barca defence.

Overall, it was a game of few clear cut chances, and with neither side giving away any ground, it is now up to Real take the initiative and begin the climb back up to the summit of La Liga.

What do you think? Who deserved to win the match? Let me know in the comments below…