As the news slowly made its way across the pond to me that Thierry Henry had signed for the New York Red Bulls, I couldn’t help but think, “He is always right”. As a long time Arsenal fan, I was as disappointed and worried as other fans when Arsene Wenger allowed Henry to leave for a modest €24 million back in 2007. Yet three years down the line, Wenger has once again been vindicated for his expert judgment.

Arsene Wenger is at the complete opposite spectrum of education to most men in football. He has a degree in electrical engineering and a masters degree in economics. He is fluent in French, German and English, and can also speak Spanish, Italian and Japanese. So it comes as no surprise that he makes the right decision for Arsenal Football Club the majority of the time. He has often been criticized for some of his transfers at the time of making them but is always proven to be correct.

Let’s look at some of Wenger’s major releases from Arsenal. Patrick Vieira was his first big signing and became a stalwart for the next 9 seasons. He was adored by the fans and they would have given anything to keep him, especially after his winning penalty in the F.A Cup Final 2005.

Vieira wanted to leave, he needed a new challenge in his life and although his heart may still have been at Arsenal his mind was not. Wenger allowed Vieira to leave with little fuss. He was sold to Juventus for around €20 million a profit of €15 million for Arsenal.

Vieira went on to win 4 Serie A titles (one of which is void with Juventus for the match fixing scandal) but during his time at Inter was never a key player. Due to injury and decreasing ability Vieira made only 67 appearances in 3 and a half seasons at Inter. He was back-up to Olivier Dacourt, and later to Cambiasso and Thiago Motta.

Vieira never had the same impact at other clubs that he did at Arsenal, he was never the same player. Arsene Wenger was right to release him when he did, the financial profit was justified. He also knew he had Cesc Fabregas in his ranks as his next ‘go to guy’. One year after leaving Highbury, Vieira returned to face Arsenal in the Champions League with Juventus. He was totally outplayed by the young Fabregas, as Arsenal won 2-0. That was the moment when all Arsenal fans said “He is always right”.

Now let’s look at Thierry Henry’s career, post Arsenal and Wenger. In his first season at Barcelona, Henry was the clubs top scorer with 19. An impressive start, but compare that to his last five seasons at Arsenal were he averaged over 30 each year and you see a stark decline. He then had his standout year at Barcelona winning six trophies along with the deadly trio of Eto’o and Messi. But this was Lionel Messi’s team, it was never Henry’s.

He was never loved by the fans the way the Arsenal fans loved him. The next year he was a bit part player due to the emergence of the young Pedro. So two seasons of Henry playing good, but not the same standard he was at during his Arsenal days, would again vindicate Wenger’s decision to let him go. Now, only three short years after leaving Arsenal, Thierry Henry has wound up in the MLS.

I am at college over here in the States and I can tell you, the excitement may not be what you would expect. The World Cup is over and so is the soccer euphoria. I had to look on the BBC website to even learn of Henry’s ‘big move’.

Wenger knows when to cash in on players who are coming to the end of their careers. He knows that sometimes it is better to get the value of the player, still just in their prime, and use that on young talent, rather than hold on to some nostalgic notion that they must keep Arsenal legends until they retire.

If a player wants to stay and play out their careers at Arsenal, Wenger is happy to let them, just as Bergkamp showed. But if they would rather leave, then Wenger will cash in and 99% of the time his decision is the right one. Where now, are players like Jose Reyes, Aliaksandr Hleb? Even Kolo Toure and Adebayor are not the same players at Man City. These players are far from washed up, but Wenger knew that they weren’t worth losing money over.

While Wenger knows when to let his players go, he also knows when to fight for a player. If Cesc Fabregas were to leave this summer it would cripple Arsenal. They would have no captain, no playmaker, no real goal scorer. That is why Wenger fights with everything he has to keep Fabregas.

He also knows that Fabregas would fit well into Barcelona and make them an even more formidable European force. Fabregas has a huge decision to make, he has an almost father/son relationship with Wenger which is hard to let go. He could stay and hope that finally his team mates want a trophy as bad as him, or he could leave and undoubtedly win something, but know that he wouldn’t be anywhere near as important to Barca. 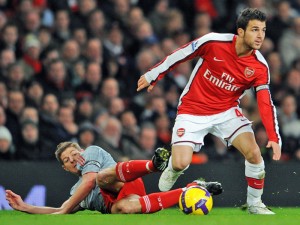 Cesc Fabregas would be the major factor in Arsenals performance for the next five years. If he leaves they will suffer, if he stays he could finally bring back some silverware to the club.

Arsenal will go on, with or without Fabregas. His departure would be far more damaging than Henry’s or Vieira’s or any player under Wenger’s reign. However, Arsenal fans should remember this. Whatever decision Arsene Wenger makes will be the right one. He has the future of Arsenal in his mind always and does what is best for the club.

He will recover and re-build Arsenal once again as he has done every time a big player leaves. Who would question the wisdom of a man that could answer you in 6 different languages?