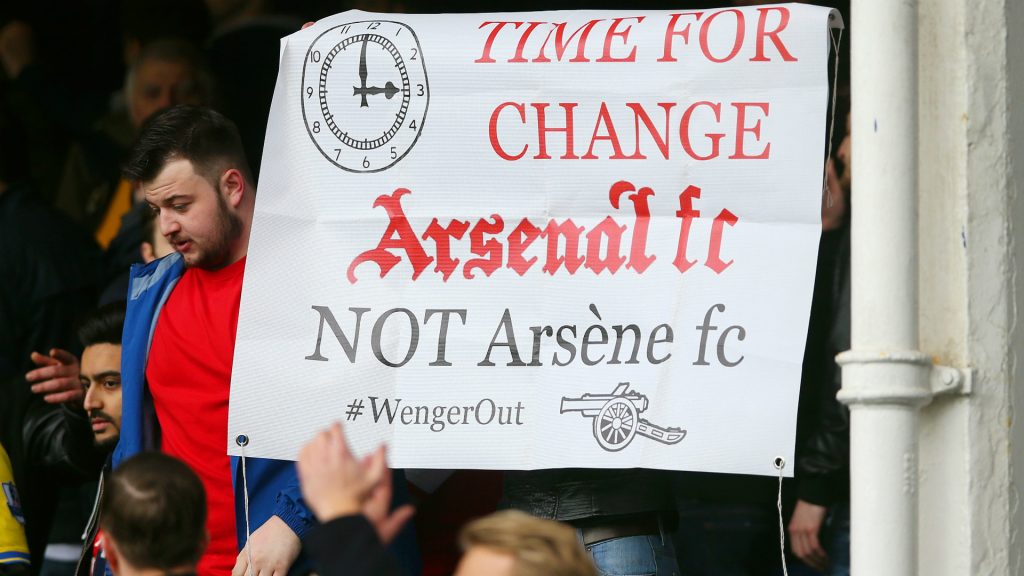 Arsene Wenger’s pre-match press conference ahead of Arsenal’s Premier League clash with Norwich City gives an indication the Frenchman is under loads of pressure.

After making a great start to the season, Arsenal somehow have managed to throw away a glorious opportunity to win the Premier League this season. It has led to unrest among the fans, as three of Arsenal’s supporter groups intend to protest at the Emirates, calling for a “Time for Change”

Fans from the Arsenal Supporters’ Trust, the Black Scarf Movement and Red Action will hand out placards and urge the crowd to hold them up after 12 and 78 minutes, as a sign of protest aimed at the hierarchy and manager Arsene Wenger.

Arsenal are currently fourth in the league, and are fighting to hold off Manchester United for the Champions League spot. Wenger feels that the fans have been manipulated by a minority into protesting.

“Apart from an agenda – a personal agenda, a big ego – there’s not a lot behind it,” he said. “When people pretend to be Arsenal fans and, every week, they come out against the club, you cannot say it’s not manipulation. They look for their own agenda, to get people on Twitter and social networks, and it becomes a way to behave. Ideally, it’s a little bit easier when everyone stands behind the team but that’s not an excuse.

He says that fans should remember how he kept Arsenal competitive with his team’s consistent involvement in the Champions League over a decade at a time when the incomes of the club were restricted by the repayments of debts following their move to a 60,000-seater stadium.

It is really shocking to see that Wenger is being sentimental here and trying to justify what he did for the club. In truth, Arsenal fans do acknowledge his immense contribution to the club, and respect and worship him, but that doesn’t mean he is above all criticism.

“When we built the stadium the banks demanded I signed for five years,” he added. “I did it. Do you want me to tell you how many clubs I turned down during that period? I have shown I am committed.”

“When we built the stadium, we knew we’d have five to seven difficult financial years where we had to pay the money back: we had to be three years in the Champions League out of five and have an average of 54,000 people [to meet costs], and we didn’t know we would be capable of that. We had to sell our best players every year to survive but we didn’t do three years out of five in the Champions League. We did five out of five. Now the club is in a stronger position and we can compete again with our main opponents.”

Wenger suggested that he offered a verbal guarantee to the bank investors that he would remain at Arsenal to provide the stability the club needs and ensure the Gunners met their targets of Champions League football, on a shoe-string budget.

“The banks wanted the technical consistency to guarantee we had a chance to pay back [the loan],” he said. “I did commit and I stayed, under very difficult circumstances. So for me to find [his critics] are reproaching me for not winning the championship during that period I think is a bit overboard. I accept criticism but I think that it is a bit too far.”

The Frenchman signed contract extensions in 2004 and 2007, and rejected lucrative offers from Real Madrid, Barcelona and Manchester City, during that period.