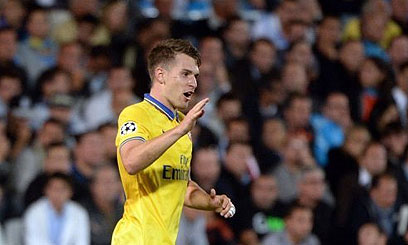 We are all accustomed with this familiar picture of Arsene Wenger shaking his head in disbelief, with lurid face, hands rubbing on it, in utter frustration.

Thousands of times or even more than that in the last few years, Wenger was questioned about the maturity of his players, his philosophy of trusting young guns, every time Arsenal have failed to deliver. Yet, he chose to stick with it and found a way to hit back at his critics.

On the contrary, Jose Mourinho was talking about his young guns and compared them with beautiful eggs. Yet, as it stands out, the eggs cracked up, when a little bit of pressure was applied.

I wrote about role-reversal in the previous article, and here you are with Mourinho contemplating about his side’s maturity and personality of his players.

And how well Arsenal this season have shown their maturity against adversity. In the first match, they were humiliated by Aston Villa that resulted in mass outrage from the fans. On the very first day, it reached the nadir of pessimism. The Gunners fought back when they hit rock bottom.

They showed tremendous maturity and belief against Fenerbahce. They took that confidence against Tottenham in the North London derby and earned a massive victory over their rivals. The manner in which they held on to their slender lead was praise worthy.

Against Sunderland at the Stadium of Light, despite taking the early lead, the scores were leveled after half time. The momentum could have shifted to the Black Cats’ side but it was the sheer maturity of the young players like Aaron Ramsey and attitude of the overall team that changed the fortune of the match in their favour.

And likewise, yesterday, they weren’t brilliant by any stretch of imagination, especially in the first half. Yet, they found a way to snatch full three points in the opening Champions League Group stage match. That sort of maturity will prepare them for the battle in the Premier League title race.

In the league, there will be various occasions, when things won’t work accordingly; plans will go hay-wire, out of the window, a typical bad-day-in the office and getting positive results from those situations will classify them as Champions material.

So far, the signs are positive. Players have taken extra responsibility and have shown tremendous maturity under pressure. Expect bright things to happen for them, unless injury takes its cruel revenge.