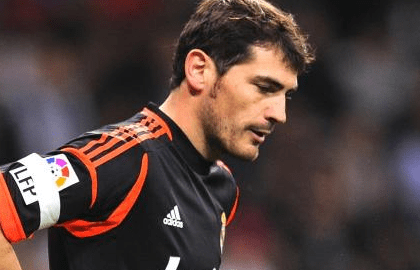 Iker Casillas is set to leave Real Madrid on a free transfer when his contract expires at the end of the next season.

The Spain international’s current deal with the Champions League winners runs down in 2015 and the goalkeeper has not been offered a new deal by the Los Blancos. According to the Spanish newspaper El Confidencial, the 32-year-old will leave the Santiago Bernabéu Stadium for nothing next summer.

Arsenal have long been interested in securing a deal for the stopper and Arsene Wenger could land the two-time Euro and Champions League winners for free next May. The Gunners registered their interest last summer, but were unsuccessful in their attempts to land him

During Jose Mourinho’s last season in the Spanish capital club, the Portuguese tactician allowed Casillas to spend the time on the bench and field his compatriot Diego Lopez ahead of him.

Mourinho was replaced by Carlo Ancelotti last summer and the arrival of the Italian manager did no good for the Casillas. The former AC Milan and Paris Saint-Germain preferred Lopez for league fixtures, while the 32-year-old was used in the Champions League fixtures.

Casillas is aware that his future at Madrid beyond the next season looks slim and it is unlikely that he could get a new deal. Arsenal, being a club from England will be allowed to enter into negotiations with the Spaniard to sign a pre-contract agreement from January 2015.

Wenger could strike a pre-contract deal with Casillas at the start of the next calendar year and the World Cup winning goalkeeper could make a switch to the Emirates next summer. Another Spanish newspaper AS also reports the player could leave for nothing after his contract expires next year.

Casillas has expressed his desire to play till 40, which means, according to the keeper, he still has eight years of top-flight football left in him. He has admitted that he will consider his future when his contract expires at the Bernabéu.

“I’m thinking more and more about what I’ll do when I quit playing. I’d like to stay involved in football and help the club, if the circumstances allow it,” Casillas told Marca earlier in March.

“I can play on until I’m 40. If you look after yourself as a goalkeeper, you can carry on until that age. I’d love to be able to keep playing for Real Madrid until I’m 40, but a time will come when that’s not possible. I’ll consider my future at Real when my contract expires.”

With Casillas all but set to leave Real on a free transfer next summer, Arsenal could be his next likely destination as it is very unlikely that he could play for any other Spanish club.

Meanwhile, Wenger saw Łukasz Fabiański leave the Emirates on a free transfer to Swansea City after helping the Gunners win the FA Cup in May.

The big question is will the Frenchman wait till next season to find a back-up keeper for Wojciech Szczęsny, cause if an injury to the Polish international next season could hamper the North London club’s chances of winning silverware next season.