Arsenal young forward Serge Gnabry has been rewarded with a new long term contract after his impressive progress this season, the club has confirmed. 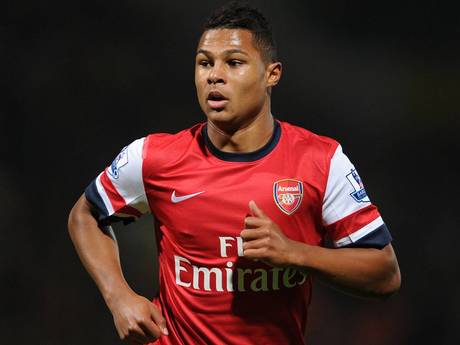 The 18-year-old, who came on as a sub in Arsenal’s 2-0 victory against Crystal Palace on Saturday, is considered as one of the brightest talents in the Arsenal ranks. Following the injuries to Theo Walcott and Alex Oxlade-Chamberlain, the youngster has been getting enough exposures this season. He scored his first senior goal for the club against Swansea City, a week after making his full Premier League debut against Mark Hughes’ Stoke City.

Arsene Wenger praising the youngster highly and said: “We signed Serge Gnabry because I believe that he will be a great player. He’s nearly there now, and competes for a regular place in the team in the Premier League.

“He has technical ability, he has power, he has pace, he has finishing quality and he can give a final ball. He’s a powerful offensive player and I believe that he will be a great player for Arsenal Football Club.”

Gnabry said: “Arsenal is a great football club and I’m so happy to be here and sign a new contract. For me, now it’s all about working hard and developing my game.

“I’ve had some good opportunities recently in the first team, which has given me extra confidence, and this will only improve my game. I’m looking forward to giving my best for this club in the years to come.”

Apart from featuring in the Premier League, Gnarby has also featured in the Champions League as also in the Capital One Cup as well. In the League Cup, he played the full 120 minutes against West Bromwich Albion where Arsenal won through penalties.