Arsenal and Sunderland play their penultimate game of the 2014-15 Premier League game this evening with each needing a point for different reasons.

A draw for the Gunners would be enough to wrap up third place and automatic qualification into next season’s UEFA Champions League, whilst three points for the home side would give them an outside shot of finishing second, should Manchester City slip up on Sunday at home to Southampton.

Sunderland need one point from either of their final two games to guarantee survival. Even if the Black Cats were to lose both games, Hull City need to beat Manchester United and Newcastle would need to draw with West Ham to send Dick Advocaat’s team down.

Arsène Wenger has confirmed that Mathieu Debuchy, Alex Oxlade-Chamberlain and Danny Welbeck are all sidelined for this evening’s match.

Mikel Arteta has yet to make his return to the first team despite being back in training for a few weeks now. The former of Francis Coquelin and Santi Cazorla are making it difficult for the captain to get back into the side – and Jack Wilshere has put in two energetic performances from the bench since his recent return.

Laurent Koscielny is a doubt with the flu.

A knee injury has kept Wes Brown out of the last two games for Sunderland. Sebastián Coates has started the last four games having previously had limited opportunities since arriving on loan from Liverpool at the start of last season.

Another South American loanee on Wearside, Ricky Álvarez too has seen limited action for Sunderland this season and is not going to feature at the Emirates because of a knee injury. Liam Bridcutt is unlikely to be available to Advocaat in midfield either. 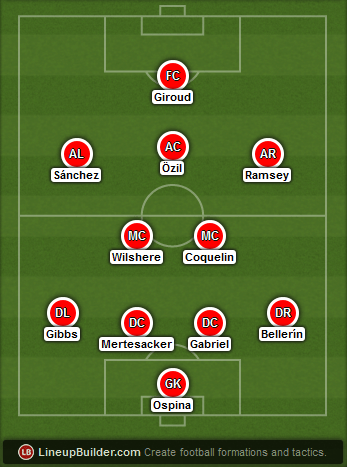 Having named the same starting XI for a personal best six consecutive games, we see a couple of changes made by Wenger on Wednesday. With Laurent Koscielny being a doubt we think this would be a useful time to give Gabriel Paulista a game. And following Nacho Monreal’s slack marking for Ander Herrera’s goal at the weekend, we can see Kieran Gibbs getting a run out at left-back in a second defensive change. Also, Jack Wilshere has made two substitute appearances in the last game – we think the England international starts this one to give Santi Cazorla a break before the FA Cup final. The attack remains the same as Olivier Giroud faces little competition despite going five games without a goal now. 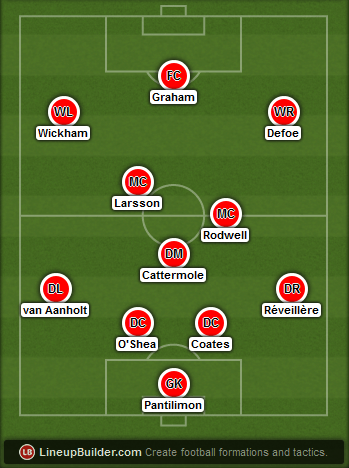 Dick Advocaat has had some success in recent weeks with the 4-3-3 formation – unbeaten in their last four matches now, including wins over Southampton and Everton. Jermain Defoe has been a breath of fresh air but struggled in North London derbies as a Tottenham player. Danny Graham is a surprise recall to the first team, whilst former Gunner Sebastian Larsson is a permanent fixture in midfield.

Alexis Sánchez vs Anthony Réveillère
A quiet and disappointing performance versus Antonio Valencia and Manchester United at the weekend, we’re expecting Alexis Sánchez to sign off the 2014-15 season at the Emirates with a bang with Wenger likely to rest his stats on the final day of the season. Sunderland right-back Anthony Réveillère brings a wealth of experience at 35-years-old, but will he be able to keep up with the tireless-working Chilean? How well Réveillère and Sebastián Coates are communicating alongside one another in such a limited amount of time alongside each other will be tested with the movement from the likes of Sánchez, Mesut Özil and Olivier Giroud.

Jack Wilshere vs Lee Cattermole
If Jack Wilshere gets his start like we’re expecting, then we can be in for a tough battle in the centre of midfield with both he and Lee Cattermole taking no prisoners. The Arsenal midfielder loves to bomb forward and take on opposition midfielders which should make for a really entertaining battle this evening. Wilshere can be a focal point in Arsenal’s midfield in this game, especially if he starts in Santi Cazorla’s position. Sunderland do have three centre midfielders to try counter that, but Wilshere is not the only player they’ll need to pick up.

Aaron Ramsey vs Patrick van Aanholt
Aaron Ramsey has been involved in seven goals in his last eight Premier League appearances (4 goals, 4 assists) since mid-March. He was lively in the second half at the weekend and was the key to Arsenal rescuing a point at Old Trafford. Patrick van Aanholt likes to get forward from left-back but we expect him to be more cautious in this game. But it will be how well he follows Aaron Ramsey when the Arsenal midfielder drifts inside that could be telling part in the result of this match.

14 – Lee Cattermole has 14 yellow cards this season; the joint-most in a single Premier League season (with Mark Hughes, Robbie Savage and Cheick Tioté).

113 – Danny Graham has scored only 18 goals in his 113 Premier League appearances during his career.