A place in the 2015 FA Cup final is at stake as holders Arsenal take on Championship side Reading on Saturday evening.

The Gunners are the country’s in-form team with 16 wins in their last 18 games in all competition. They are heavily expected to progress to the final where Liverpool or Aston Villa await.

Reading have not won in the league since their booked their place in this semi-final and have taken just three points from their last six as they are set to finish the season narrowly above the relegation zone.

Arsène Wenger has confirmed that Wojciech Szczęsny will start in goal having played in the recent rounds. The Polish international has been dropped in the Premier League since New Year’s Day’s defeat to Southampton.

Jack Wilshere, Mikel Arteta, Mathieu Debuchy and Abou Diaby could all make their returns from injury this weekend having all returned to training for more than a week now.

Alex Oxlade-Chamberlain is the only confirmed absentee for the French manager.

Steve Clarke rested a number of first-team players in their midweek defeat to Bournemouth to give his side a chance in this one.

The Royals do have doubts over striker Pavel Pogrebnyak and defensive midfielder Nathaniel Chalobah, whilst on-loan Nathan Aké is cup tied, but otherwise have the majority of their squad to choose from. 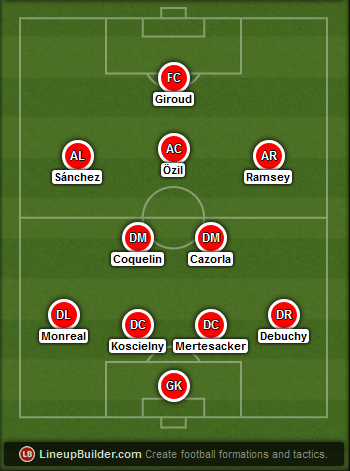 Szczęsny in goal is one change from the team that beat Burnley last Saturday. We can also see Mathieu Debuchy returning at right-back after a long spell on the sidelines with a dislocated shoulder. It’s hard to see Wenger making many more changes from his successful lineup for such a big match. It wouldn’t be too surprising to see Danny Welbeck line up on the wing though but we’re not sure he should take the risk in dropping Aaron Ramsey. 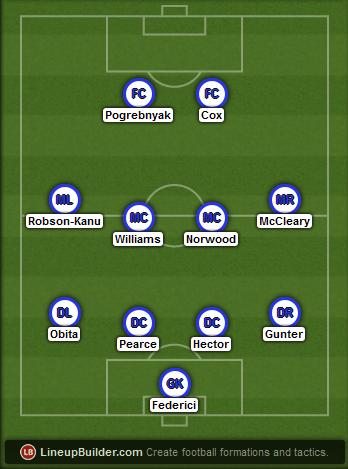 Steve Clarke plays a 4-4-2 formation. Simon Cox is the club’s top scorer in the league but with only eight goals to his name. Alongside him, Pogrebnyak has six goals for the season. Garath McCleary is a tricky playmaker down the right wing who should give Nacho Monreal a few problems. Oliver Norwood is the playmaker in the middle of the park.

Alexis Sánchez vs Chris Gunter
Reading’s current right-back was a yard off the pace when he last played in the Premier League. Chris Gunter will be facing one of the league’s top wingers this weekend too, and Alexis Sánchez has started to find his form again recently so expect the Chilean to cause a real nuisance to the Championship side’s defence. He’ll need a lot of help from McCleary in front of him, whilst Nacho Monreal likes to support from full-back.

Santi Cazorla vs Oliver Norwood
The Reading midfield are going to have a busy day against some of the Premier League’s finest. Santi Cazorla has been dictating many games from deep recently and can be expected to do the same again this weekend. Whether Reading will put one of their strikers on him or leave it up to the midfield, they should look to keep someone close to the Spaniard at all times. The problem is, Cazorla has the likes of Sánchez, Mesut Özil and Aaron Ramsey in support.

Aaron Ramsey vs Jordan Obita
Prone to the odd foul and collecting a yellow card, Reading left-back Jordan Obita will need to be careful of the movement of Aaron Ramsey. The Welsh midfielder scored the winner at Burnley last weekend and makes intelligent runs into the penalty area where time and time again he finds himself open. Arsenal should see a lot of the ball and territory and if Reading are making it difficult to break down, he certainly has the making of a match winner in this game.

6 – Reading are winless in their last six league games, scoring only five goals during this run, and conceding 10.

8 – Arsenal have had eight different scores combine for nine goals in this season’s competition. Olivier Giroud is the only Gunner to have scored more than once (2).

10 – Arsenal are undefeated in their last 10 FA Cup ties, winning last season’s final in extra-time after coming through their semi-final on penalties. They have kept a clean sheet in only two of their last eight matches in the competition.