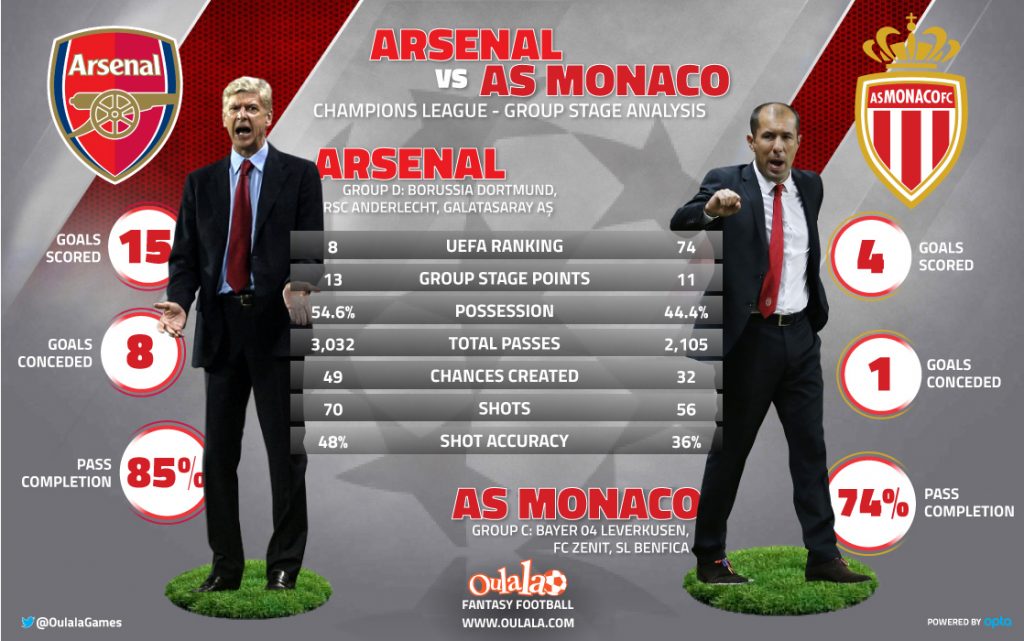 Arsenal host AS Monaco at the Emirates tonight in the 1st leg of their Champions League last 16 match-up. After exits from the competition at this stage in their previous four seasons against the likes of Barcelona, AC Milan and Bayern Munich and with the disadvantage of playing away in the second leg the pressure is on the London club to make it to the quarter-finals for the first time in five years.

Our friends at Opta powered fantasy football game Oulala returned to the group stages with their detailed analysis to see how both sides fared going into the knockout phase.

Despite Monaco winning Group C and Arsenal finishing as runners-up in Group D it is the English side that racked up more points (13 to 11) and excelled during the group phase.

With Arsenal’s 15 goals compared to the disappointing 4 from Monaco, it’s clear which side had the superior firepower. Arsenal also unsurprisingly led for total shots (70 to 56), shot accuracy (48% to 36%) and chances created (49 to 32).

The only criteria that Monaco did better than Arsenal at was goals conceded, just 1 goal to Arsenal’s 8. An impressive total of 5 clean sheets from their 6 group stage matches. Monaco were in-fact the side that conceded the fewest goals of all 32 teams competing in the group stages.

With the free-scoring Arsenal up against the seemingly unbreakable defensive unit of Monaco, the strategic battle should be truly fascinating…