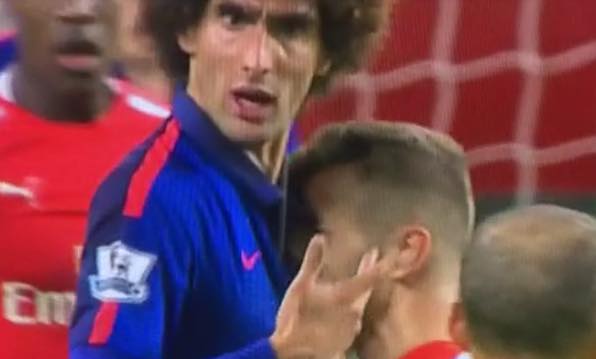 Arsenal dominating long periods of play and not ending up winning the match is nothing to be surprised about, it has happened far too often. It was no different at the Emirates against Manchester United. That said, to go a goal down without the opposition having even a single shot on target is no mean feat, and Arsenal managed to achieve this when Gibbs deflected the ball into his own net in the 56th minute of the game.

Coming into the match both teams had major injury concerns especially in their respective back lines. Smalling and Monreal would not brim either the Man Utd or the Arsenal fans with much confidence but neither Louis Van Gaal nor Arsene Wenger had much choice. Make shift defensive line ups excited the neutrals who would have been expecting a match full of chances and goals, but the match was a bit of an anti-climax if you were expecting that.

If the first goal Man Utd scored was a stroke of luck then the second was a show of naivety from Wenger’s Arsenal. There were wide open spaces behind the Arsenal backline for the likes of Di Maria and Rooney to exploit. A very impressive Fellaini started off the move playing the ball into Di Maria who smartly exploited the space and time given to him to set up Wayne Rooney. Rooney ran in behind the Arsenal defense and cleverly chipped the ball over substitute goal keeper Emiliano Martinez to make it 2-0 in the 85th minute. This goal was a result of the desperation shown by Arsenal in search of the equalizer as they ran out of ideas slowly but surely against a very resilient Manchester United team on the night.

Arsenal dominated the proceedings in the first half creating numerous opportunities only to be left scratching their head due to the inspired David De Gea in the Manchester United goal. Perhaps the most glaring miss was from Jack Wilshere who was brilliantly set up by former Manchester United striker Welbeck. Wilshere dallied before shooting straight at David De Gea who guessed the right way. Frustration grew and with every passing minute, United became more and more assured defending their goal. It was all square at half time, another story of missed chances and what ifs for Wenger and his team at half time. Van Gaal admitted after the match that he was not happy with his team’s performance in the first half but he sure would have been glad to have his team talk with the score at 0-0 despite the opposition dominating most aspects of play.

In the second half Arsenal couldn’t open up a make shift Manchester United defense who had also lost Luke Shaw early in the game. De Gea did have to pull off more saves but none was out of the ordinary. It wouldn’t be wrong to say that David De Gea has been Manchester United’s best player this season so another performance of this magnitude should come as no surprise. The recent reincarnation of Fellaini was evident as he not only broke Arsenal’s play in midfield but set up counters for his team mates. With Arsenal becoming more agitated in their search for a goal there were gaping holes behind the Arsenal midfield. Manchester United looked more and more threatening on the counter attack and it was like watching the quintessential Arsenal display of dominance and easy on the eye football with no end product. Once Manchester United got the lead through the own goal, you could sense the mental block of Arsenal against big teams in recent years playing its part. The full backs pushed forward and the midfield left a pace-less center-back pairing fully exposed and Manchester United took full advantage through the Rooney goal. They could have had another goal when Di Maria was left one on one with Emiliano Martinez, however his dink finish was off target. There was one bright spot for Arsenal though, Giroud scored on his return from injury through a cracking volley to which De Gea got a hand but couldn’t keep it out. It was a nervous last 4 minutes of stoppage time for Manchester United however they held on to register their first away league victory this season.

So was Manchester United lucky? Was Arsenal Unlucky?
Not to win once in a blue moon in a match you have dominated can be attributed to bad luck however this is nothing new for Arsenal. In Fact we don’t need to go back too far in time to validate this, look at the performance against Anderlecht in the UEFA Champions league when the Gunners were leading 3-0 at home and ended up with a 3-3 draw. In the Premier league look at the home match against Tottenham Hotspurs this season when Arsenal dominated play but looked vulnerable on the counter, this clash against Manchester United was almost like watching a replay of that.

As for Manchester United and Louis Van Gaal, it is a small step in the right direction. A makeshift defense, without the protection of Daley Blind in midfield managed to hold on away from home against Arsenal. For all the talk about how poor United’s start this season has been they are still in the top 4. That shows you how average their direct rivals have been this term. The most important thing in this match for Van Gall has to be the maturity shown by Wayne Rooney in finally standing up as the “Leader”. He diplomatically resolved the confrontation between Fellaini and Wilshere and ran all over the pitch doing the unrewarding yet essential work like a man possessed.

The vultures will again start circling over Wenger’s head. The man who revolutionized English football when he came in the 90s now seems to be lacking in ideas. It will be harsh to criticize him given what he has done for the football club but the fans seem to be losing their patience. The title aspirations shown before the season kicked off, seem a distant dream; realistic target yet again has to be finishing in the top 4.