Saturday afternoon looks an exciting prospect with two of the top sides in the Premier League facing off. Arsenal are in top gear and are looking to extend their lead at the top of the table, while Liverpool are hot on their heels looking to overtake their opponents. This game promises to be a fierce midfield battle, while both sides have attacks in full flight. There could be a few goals in this one. 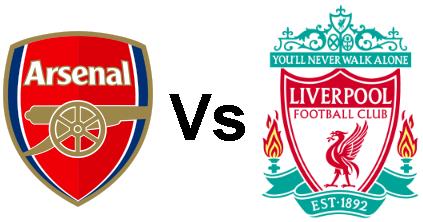 Brendan Rodgers will probably keep the 3-5-2 formation that has been working so well recently. Coutinho returns from injury and is a possible starter, while Enrique is in doubt due to injury. Daniel Agger could return to the side but it is a mystery as to who he replaces – it probably won’t be Skrtel due to his stellar form, most likely a straight swap for Sakho but we could see him come into the centre, shift Skrtel right and have Toure on the bench. But I’ll leave it up to BR.

Arsenal have a few injuries including Podolski, Walcott and Flamini. This should allow Arteta to start instead of Flamini in an otherwise unchanged line up. The midfield is in full function and has the ability to pass any team to death with their current form.

SAS v Koscielny and Mertesacker – Suarez and Sturridge are arguably the best front men in the league at the moment and are looking lethal. They may look to target Mertesacker due to his lack of pace, trying to get behind the back line. However this partnership is looking superb the moment and could be hard to break down. If Suarez and Sturridge get some decent balls to feet then they may come out on top in this battle.

The midfield battle – This will probably be where the game is won and lost with two strong midfields coming together. Arsenal have the stronger midfield at the moment, but with the return of Liverpool’s Brazilian magician Coutinho, the reds could compete in the middle of the park. With probably the best midfield in the world right now, Arsenal may just be too strong.

Out wide – Arsenal will probably use a centralised midfield drifting wide, like they have been recently. Sagna and Gibbs will play as full backs and will have their hands full with Liverpool’s wing backs Cissokho and, especially, Glen Johnson. This will be a tight battle as neither side use width as their main attacking threat.

Giroud v Liverpools back three – Giroud is playing extremely well and is currently one of the best attackers in the league, however he will come up against a strong back three, with Skrtel in top form, Sakho and Toure also playing well and the possibility of Agger coming back into the side.

No doubt this will be a fantastic game, with plenty of tightly contested match ups. I just can’t wait for this one. It’s an impossible game to call. Just sit back and enjoy the show.