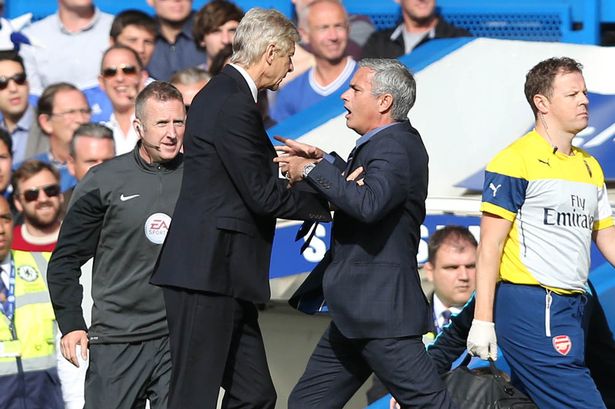 Arsenal and Chelsea face off in a top-of-the-table clash at the Emirates Stadium on Sunday. Even though a game between the top 2 at this stage of the season is usually very important in the title race, this one is not. Chelsea are 10 points ahead of the Gunners, and even a win for Arsene Wenger’s men will not really change things too much.

But, the game promises to be an exciting encounter as two teams with contrasting styles but common aims clash. Arsenal are the most in-form team in the league, with an 8-match winning streak to their name. Last Saturday, they beat Reading at Wembley to book their place in their FA Cup final for the second season running. The title push may be a tad too far away, but the Gunners are certainly finishing the strongest among all Premier League teams.

Chelsea, on the other hand, have been unconvincing for months now, but have managed to win games and maintain their lead at the top. Last week’s 1-0 win against an in-form Manchester United side told you all you needed to know about the hunger and desire in the Blues to win their first league title in 5 years.

There is a lot to look forward to on Sunday, and there are some key individual battles that will be fought out that will decide the course of the game.

We pick out three of them:

The best defensive midfielder of the season takes on the best defensive midfielder of 2015. The former, Chelsea’s Nemanja Matic, has been outstanding for the Blues and after a minor dip in form, was back to his combative best against United last week. He will have his work cut out against Arsenal too, as there are few other teams as good at moving the ball quickly as the Gunners. With Mourinho expected to flood midfield and possibly hand starts to Kurt Zouma and Ramires as well, Matic will have to make sure every gap is covered.

Coquelin, on the other hand, has been the major reason for Arsenal’s renaissance since his return from loan at the end of last year. The Frenchman has been one of the most impressive individuals on show in the whole of the league in the past few weeks, and has added bite to Arsenal’s flair. This has made them difficult to beat. His supreme passing ability has also been on show.

This central midfield battle will be pivotal and will go a long way to deciding who comes out on top.

Chelsea are going to play on the counter and their biggest threat is going to be Eden Hazard. The Belgian scored the winner against United last week, and is also in line to win the PFA Player of the Year Award on the same day as the game against Arsenal. Whoever plays at right-back at Arsenal faces an uphill task. Mathieu Debuchy made a surprise return to the starting line-up against Reading last week, but having played 120 minutes, may not start against Chelsea. Hector Bellerin has filled in admirably well for the Frenchman and even though he is only 20, he will be relishing the prospect of facing one of the best players in the league. 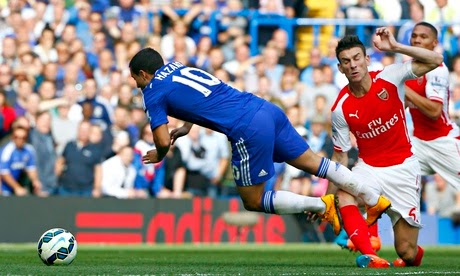 Arsenal will need to keep a tab on Hazard throughout. It was the winger who single-handedly tore them apart at Stamford Bridge earlier on this season, taking on the entire backline and winning a penalty, which he himself converted too.

Arsenal’s answer to Hazard is Alexis Sanchez, the Chilean winger who has lit up the Emirates on several occasions this season. Signed from Barcelona in the summer, Sanchez has been outstanding for the Gunners, scoring 22 goals in all competitions. He also got both goals in their 2-1 win last week in the FA Cup semi-final.

Even though Sanchez likes to roam around a bit, he is expected to start on the left. Like Hazard, he too will constantly look to cut inside. Up against him will be Branislav Ivanovic, Chelsea’s right-back who has been hot and cold this season. The Serbian is a powerful presence and is almost unbeatable in the air, but he does have a tendency to loiter forward and go missing defensively. He has to be extremely careful against Sanchez, because it will only take one mistake for him to be punished by the clinically deadly South American.

Even though Sanchez vs Hazard is not a one-on-one battle on the pitch, it will be fascinating to see who has more of an influence on the game.

And along with these player battles, Arsene Wenger vs Jose Mourinho will be a contest in itself as well. The managers have a long history, and it will be safe to say that relationship is anything but friendly. Wenger hasn’t beaten Mourinho even once in the 12 meetings with him, but he will know that this is the perfect opportunity to get rid of that statistic once and for all. Arsenal will try to play attractive football, and Chelsea will try to stop them from getting through. The philosophies of these two great managers are as alike as chalk and cheese, but the fierce desire to win is common.