The first competitive game of the 2015-16 season sees London rivals Arsenal and Chelsea meet in the FA Community Shield on Sunday.

José Mourinho’s side finished 12 points ahead of the Gunners in last season’s Premier League but it was Arsène Wenger’s men who lifted the FA Cup in May.

Much of the pre-match attention will be on 33-year-old goalkeeper Petr Čech, who could make his Arsenal debut this weekend versus the club he spent 11 seasons with.

The Czech Republic international made the switch across London this summer for first-team football. With David Ospina ruled out, Čech is in line to start.

Goalkeeper David Ospina is only just coming back from holiday and Wojciech Szczęsny has been sent out on loan to AS Roma.

Alexis Sánchez is not yet back from his extended holiday after Chile won the Copa América earlier this month.

Danny Welbeck has not taken part in any of Arsenal’s pre-season and is still short of returning for the Gunners with a knee injury. He is the only played sidelined through injury for Wenger ahead of Sunday.

Gary Cahill is a doubt with a broken nose this weekend. Should he not be able to play with a protective face mask, Kurt Zouma is the most-likely replacement at centre-back.

Diego Costa is a more serious doubt for Chelsea as he picked up a hamstring injury in their last pre-season match. The Spanish striker is not expected to be risked given his history of hamstring issues. Therefore, Radamel Falcao could be in line to make his debut. 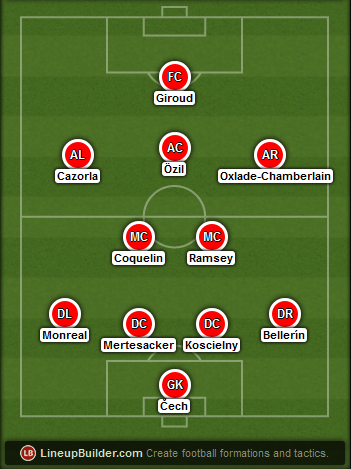 This is the same back four that started Arsenal’s 0-0 draw at home to Chelsea in the Premier League at the end of April. Mathieu Debuchy isn’t always the best at getting back and Wenger won’t want to see Eden Hazard in free space down that side. Theo Walcott could potentially start on the right or up front but we think he may be used as an impact sub in this one. Jack Wilshere competes with Aaron Ramsey for the central midfield role but otherwise we shouldn’t see any or too many changes from this XI. 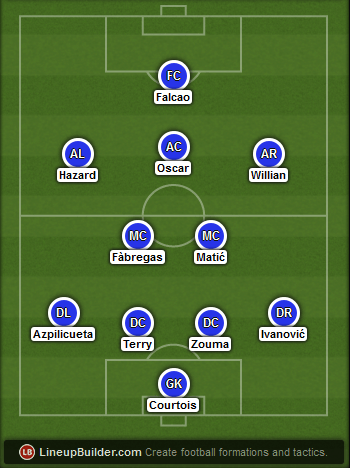 José Mourinho is looking to maintain his unbeaten record versus Arsène Wenger and we don’t see him naming a weakened squad for this one. All eyes will be looking out to see who the Special One names up front should Costa be absent. Radamel Falcao only joined up with his new teammates a couple of weeks ago, whilst Loïc Rémy should not be ignored. This was Mourinho’s favourite midfield five last season.

Eden Hazard vs Héctor Bellerín
Arsenal’s young right-back had an excellent game versus Chelsea at the Emirates Stadium when they last met, keeping Eden Hazard quiet, with help of his teammates committing a number of fouls on the Belgian superstar. This could be a good opportunity for Bellerín to make himself Arsenal’s first-choice right-back for the upcoming season if his manager doesn’t know who that is already, competing with both Mathieu Debuchy and Calum Chambers for that role.

Mesut Özil vs Nemanja Matić
Arsenal’s German playmaker looked like one of the few players capable of breaking the deadlock in the 0-0 draw between these two three months ago. Mesut Özil was creative in that game and ended the season well as well as playing well in this pre-season. He enters Wembley on good form but could face one of the top holding midfielders in the game should Nemanja Matić be marking him in the middle. It will be interesting to see if Matić is supported by an out-and-out defensive midfielder or whether Cesc Fàbregas will start alongside him as he did for a lot of last season, but not always versus the big teams.

Santi Cazorla vs Branislav Ivanović
With Alexis Sánchez unavailable down the left, Santi Cazorla is likely to line up there instead of dictating the play from the middle of the park. The Spaniard is another excellent playmaker in this Gunners side and should give Branislav Ivanović a tough game if he starts down the wing. The Serbian himself likes to bomb forward and Cazorla could certainly do some damage if he gets time and space in and around the penalty area – capable of producing magic with both feet.

13 – José Mourinho is unbeaten in his 13 competitive matches as a manager versus Arsène Wenger, winning seven.

71% – Arsène Wenger has won five of his seven previous Community Shield matches. The only time he has faced Chelsea in this competition was a 2-1 loss back in 2005.

407 – Arsenal have gone 407 minutes since they last scored against a Chelsea side coached by Mourinho. This was Gilberto Silva’s penalty in a 1-1 draw at the Emirates back in May 2007 that handed Manchester United the Premier League title.