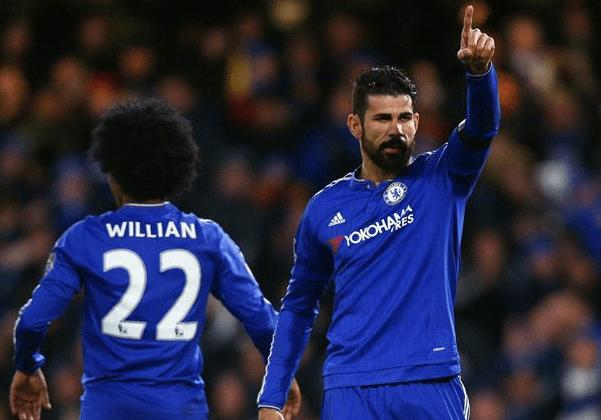 Diego Costa’s goal was the difference as Chelsea looked like they were back to their old selves with a 1-0 win at the Emirates against Arsenal.

The first half saw limited chances as Willian and Theo Walcott missed attempts at opposite ends. The game-changing moment was when Per Mertesacker brought down Diego Costa after a quality through-ball from Willian; Mark Clattenburg had no choice than to send the German centre-back off as he appeared to be the last man. Chelsea made the most of their extra man advantage shortly after, Branislav Ivanovic crossed a low ball into the near post with Diego Costa breaking away from three men to divert the ball past Petr Cech. Mathieu Flamini had a good chance to equalise before the break but the Frenchman saw his unorthodox effort sail over the crossbar.

The second half was a similar story to the first with both sides struggled to create real opportunities. The talking point of the second half was a penalty shout with Laurent Koscielny barging into ex-Arsenal man Cesc Fabregas but nothing was given. Not long after and Arsenal were back on the front foot and if it hadn’t of been for Chelsea’s resilient blocking then this match would have had a different outcome with the Gunners really struggling to break down the Blues’ back four. It wasn’t meant to be though for Arsene Wenger’s men leaving Chelsea unbeaten in eight and up to 13th whilst Arsenal failed to capitalise on the chance to reclaim top spot as they sit firmly in 3rd place.

Petr Cech: (6) Did okay against his former club, made a few comfortable saves.
Hector Bellerin: (6) Had some good runs and wasn’t troubled too much.
Per Mertesacker: (4) Had a shaky start before a rash sending off, poor performance.
Laurent Koscielny: (6) He’s had better games but looked solid at times.
Nacho Monreal: (4) Bad day at the office, at fault for shying away from the ball resulting in the goal.
Matheiu Flamini: (4) Should have scored on a few occasions, just wasn’t his day.
Aaron Ramsey: (5) Clumsy challenges and dodgy passes were Ramsey’s downfall today.
Joel Campbell: (5) A few exciting runs but never had the end product.
Mezut Ozil: (5) Lacked his ususal awareness and didn’t create much either.
Theo Walcott: (6) Made some good runs in behind the defence but was often offside.
Olivier Giroud: (5) Didn’t look bad untill he was replaced but Arsenal needed him at times.
Chelsea
Thibaut Courtois: (6) Did well when called upon, didn’t have much to do.
Branislav Ivanovic: (7) Bagged an assist and played like his old self.
John Terry: (7) Had one nervy moment but impressive otherwise.
Kurt Zouma: (8) Blocked every ball and Arsenal couldn’t get past him.
Cesar Azplicuenta: (7) His runs overwhelmed the Arsenal defence and enjoyed a good showing.
Cesc Fabregas: (9) Man of the match display, controlled the game and was unlucky not to have been given a penalty.
Nemanja Matic: (7) Didn’t stop running and was vital in this win.
John Obi-Mikel: (6) Protected his back-line well, an underrated asset.
Oscar: (6) Was involved in most of the action and did well when attacking and defending.
Willian: (8) Beat Monreal throughout, was instrumental in a lot of chances and tracked back well.
Diego Costa: (8) Gave Arsenal’s centre-backs all sorts of problems and made good runs to score and to send Mertesacker off.