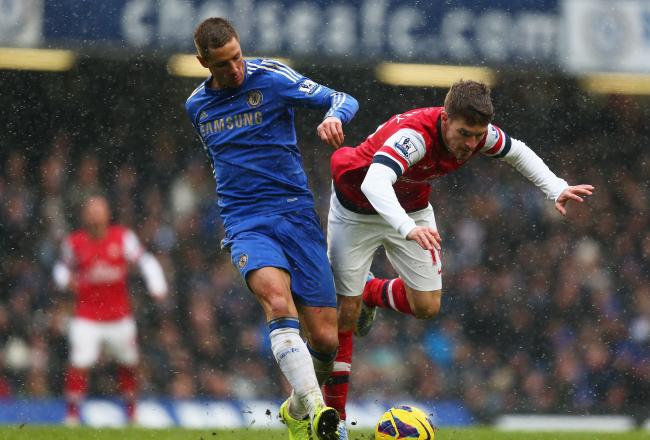 Arsenal take on Chelsea at the Emirates Stadium on Monday night, with three invaluable Premier League points up for grabs.

The game is being eagerly anticipated due to the sheer quality on show, with superstars all over the park.

Read Also: Arsenal vs Chelsea – Which Club is Better Run and Why

But, with so many world-beaters set to take to the pitch, who would be selected in a combined XI this season picked on form?

Both sides play a bespoke version of the 4-2-3-1 system, and the team might look something like this…

GK – Wojciech Szczesny
Although Petr Cech has had a solid season, Arsenal’s number one gets the nod by the slightest of margins. Much-maligned and subject to replacement rumours on a regular basis, the Poland international has been in top form this term.

LB – Kieran Gibbs
On of the unsung heroes of the Gunners’ rise to prominence this season, the English left-back has been disciplined in defence and looked to provide an outlet and get forward as much as possible.

CB – John Terry
The Chelsea skipper looks rejuvenated under Jose Mourinho, with Terry the lifeblood of the Blues side. Playing consistently well and would be a certainty for the World Cup next summer had he not retired internationally.

CB – Per Mertesacker
Has formed a fantastic partnership with Laurent Koscielny, and been one of the main reasons for Arsenal’s miserly rearguard this season. Grown in stature and playing a dominant role for his club.

RB – Bacary Sagna
Gets the nod ahead of Branislav Ivanovic by small margins. The France international is an experienced head in Arsenal’s defence, and his crossing and delivery into the box has been a key feature of the side’s attacking play.

CM – Aaron Ramsey
One of the stars of the campaign so far, the Wales international has looked like the complete midfielder this season. With eight Premier League goals, an unstoppable work rate and some fantastic individual performances, Ramsey was a certainty.

CM – Mathieu Flamini
The Frenchman has been an inspired signing by Arsene Wenger, with Flamini offering up the defensive organisation and battling qualities to allow others around him to express themselves going forward.

LW – Mesut Ozil
The assist master, the Germany international has showcased some mesmerising displays of skill and technique. Arsenal have been a more dangerous side as a result, with Ozil’s creativity a pleasure to watch.

AM – Oscar
The Brazil international is keeping Juan Mata on the sidelines at Stamford Bridge, and is in form ahead of next summer’s World Cup on home soil. Has created and scored his fair share, and is Mourinho’s first-choice number ten.

RW – Eden Hazard
Despite a slow start to the campaign, the Belgium international has started to delight the Chelsea fans will electrifying performances of late. Hazard’s skill, incisiveness and individual ability to change a game make him one of the Premier League’s best.

ST – Olivier Giroud
Although Fernando Torres has improved from last season, Giroud gets the nod due to the number of goals he has netted. The France international has led the Arsenal line with aplomb, and scored seven Premier League goals in the process.

Do you agree with the combined starting line up? Let us know below…