Arsenal and Aston Villa meet at Wembley Stadium on Saturday in the 134th edition of the world’s oldest football cup competition, the FA Cup final.

The Gunners go into the final as overwhelming favourites having finished 14 places and 37 points above the West Midlands club.

Arsène Wenger’s side also go into the match with much the better form of the two clubs, but should not take their opponents for granted as Manchester City did versus Wigan Athletic only two years ago. Hull City came close to pulling off an upset in last season’s final, racing into a 2-0 lead versus Arsenal, only to lose 3-2 in extra-time.

That was Arsenal’s 11th success in the competition – victory this weekend would make them the most-successful team in the history of the competition, whilst Aston Villa would be the joint-third best if they lift the trophy.

Route to the Final

Arsenal won their first four games in this season’s competition in 90 minutes before needing extra-time to see off struggling Championship side Reading in the semi-final.

Wenger’s side kicked off their 2014-15 FA Cup campaign with a rematch of the previous season’s final, this time at the Emirates and this time with the defending champions racing into a 2-0 lead which they hung onto.

Arsenal looked like they were going to blitz second tier opponents Brighton and Hove Albion on the south coast in round four, racing into a 2-0 lead on 24 minutes. The Seagulls fought valiantly, scoring either side of Tomáš Rosický’s third for the visitors which proved to be the winner.

Top of the Championship Middlesbrough were meant to prove difficult for Arsenal in mid-February but it was anything but a struggle when Olivier Giroud scored twice in three minutes just before the half hour mark in a game the North London club dominated on home territory – another 2-0 win.

The big match of the quarter-finals came at Old Trafford where Arsène Wenger’s side headed into the match as underdogs following a poor record versus Manchester United of late. However, the better side on the night prevailed thanks to goals from Héctor Bellerín and former United man Danny Welbeck, in each half, either side of Wayne Rooney’s equaliser for United.

Arsenal bossed the first half of their semi-final trip to Wembley against Reading and had an Alexis Sánchez goal to show for their rewards at half-time. However, the Royals, who entered the match winless in five, were able to equalise through Garath McCleary early in the second half. A howler from goalkeeper Adam Federici at the end of first half of extra-time gifted Arsenal their place in Saturday’s final.

It was five straight wins in 90 minutes for Aston Villa, also against sides in England’s top two divisions, that saw Tim Sherwood’s side book their place in tomorrow’s final.

Villa made anything but a convincing start in the third round as they waited until the 88th minute for Christian Benteke to see off cash-strapped and later relegated Blackpool in a 1-0 win at Villa Park.

Championship leaders Bournemouth were meant to give the Premier League strugglers a scare in the fourth round, but goals from Carles Gil and Andreas Weimann in the second half saw the Villans race into a 2-0 lead before Callum Wilson’s stoppage time consolation for the visitors.

Aston Villa took a 2-0 lead in the second half of their round five tie versus Leicester City in February, thanks to goals from Leandro Bacuna and Scott Sinclair, before Andrej Kramarić’s stoppage time consolation for the Foxes.

A fourth successive 0-0 at half-time in the FA Cup saw Aston Villa run out 2-0 winners in the second half against rivals West Brom in the quarter-final. Fabian Delph struck the opener before Scott Sinclair sealed the game late on before Villa fans would invade the pitch at full-time, later costing the club £200,000 in fines.

Liverpool were the favourites to reach the final when they drew Aston Villa in the last four, but despite Philippe Coutinho’s strike on the half hour, the underdogs would come back through goals from Christian Benteke and Fabian Delph. Both Coutinho and Benteke’s strikes are the only first half goals scored in an FA Cup match involving Aston Villa this season.

Danny Welbeck is the only confirmed absentee for the Gunners as Arsène Wenger’s side finished the season in good health. Whether Mathieu Debuchy, Mikel Arteta and Alex Oxlade-Chamberlain are match fit to feature in the gameday squad remains to be seen.

Centre-back Ciaran Clark has been sidelined for six weeks and will miss the FA Cup final. Goalkeeper Shay Given is a doubt through injury, having started the semi-final success. Kieran Richardson is also a doubt, whilst Libor Kozák has been out for more than a year now. 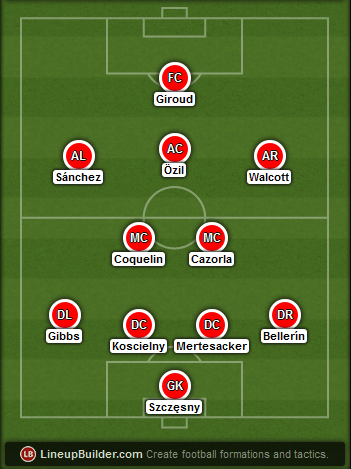 Wojciech Szczęsny has been Arsenal’s first-choice goalkeeper in the FA Cup this season despite being dropped for the second half of the Premier League season following his New Year’s Day disaster. Similar to Łukasz Fabiański starting last season’s final, we believe the Pole will start on Saturday. Kieran Gibbs may have won a place in the starting lineup at left-back in place of Nacho Monreal whilst we will see if Theo Walcott’s hat-trick on the final day of the Premier League season has earned him a place over Aaron Ramsey on the right wing. Otherwise, the team is predictable, with Santi Cazorla and Francis Coquelin likely to start ahead of Jack Wilshere. 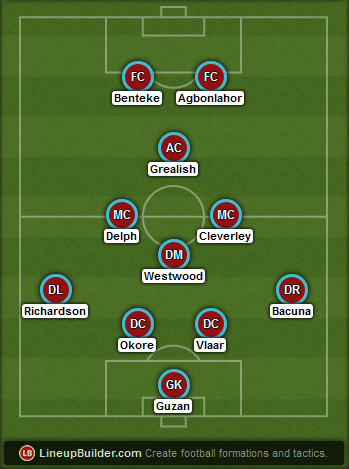 We’re going with Brad Guzan to start the FA Cup final. In defence, Jores Okore or Nathan Baker will partner Ron Vlaar, whilst Kieran Richardson is the preferred left-back if fit. The defensive midfield three will be looking to prevent Mesut Özil and Santi Cazorla from controlling the game for the favourites. Jack Grealish will be looking to close players down towards the top of Villa’s half whilst Christian Benteke and Gabby Agbonlahor will have to do a lot of work off the ball in defending from the front. The strike duo can be a good threat to Arsenal on the counter-attack.

Alexis Sánchez vs Leandro Bacuna
Arsenal have a good matchup down the left wing with Alexis Sánchez and his good goalscoring record at Wembley Stadium. Leandro Bacuna hasn’t played all that much at right-back this season but appears to be the one who will start the FA Cup final there. Arsenal’s Chilean star will be supported by Kieran Gibbs bombing on from full-back, whilst Mesut Özil and Olivier Giroud will offer him the option of short passes and one-twos to open up the Villa defence.

Mesut Özil vs Ashley Westwood
A key battle in midfield will see Ashley Westwood and co trying to stop the likes of Mesut Özil from controlling and dictating the game in the Aston Villa half. The German playmaker scored in both league fixtures versus the Villans this season and will be supported by Santi Cazorla from deep. He’ll also have players out wide to help stretch their opponents’ central midfielders.

Santi Cazorla vs Jack Grealish
Santi Cazorla put in a man of the match performance in a 5-0 win for Arsenal over Aston Villa at the Emirates back in February from a central midfield role. He’ll play a little deeper in this one but we’re going to assume he’ll have freedom to push alongside Özil when his side are in possession. Jack Grealish’s role will be to prevent the Spaniard from coming too far forward, keeping him in close check, and when Villa do have the ball, for him to hurt Arsenal on the break. He’s a good passer, a playmaker and has two quick strikers ahead of him to supply.

2 – Aston Villa’s five FA Cup matches this season have seen just two goals in the first half (both in the semi-final).

6 – Aston Villa have only trailed for six minutes in this season’s FA Cup. Arsenal are yet to fall behind in any of their five matches.

8 – Arsenal won the two Premier League meetings between these two by an aggregate score of 8-0 this season.