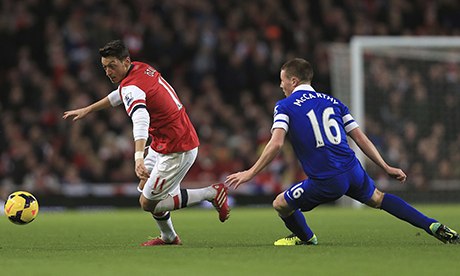 When the two teams step out at the Emirates on Saturday lunchtime in the quarter-final of the FA Cup, could we be looking at the eventual winners of the competition?

The longing for silverware has been ongoing for several years now in North London and Merseyside and when these two sides look at the other teams left in the competition they have to fancy their chances. They are the two highest placed sides remaining, excluding Manchester City, and even they made hard work of their Wembley clash with Sunderland last week in the Capital One Cup final.

There is no denying that both squads are worthy of a trophy. Arsenal have fallen short of the Premier League in recent years, which may be the case again this time round, and because of league focus, cup runs have usually suffered. But this season it seems as if they could have enough quality within the squad to take on the challenge of both the league and cup campaigns, and end their barren run which has stretched back since 2005 when they picked up the FA Cup.

Whilst for all the talent and ability the Toffees possess they just can’t make it past that final hurdle in the cup competitions, coming closest in the final against Chelsea in 2009 when they let an early lead slip. They did make the semi’s two years ago but lost out to neighbours Liverpool in a 2-1 defeat. Since Roberto Martinez has taken over they seem like a more rounded team with a solid defence and an often dangerous attack that could be capable of picking up the same trophy the club won 19 years ago.

Everyone will want to see what Mesut Ozil can do after a run of poor performance, a good display here could help fire the Gunners to Wembley and all his woes could may be forgotten by the Arsenal faithful. However, the home side will be without Jack Wilshere, who is missing with a broken foot suffered on international duty in midweek; despite rumours of a return for Aaron Ramsay, the Welshman won’t be featuring on Saturday.

Whereas Everton will be hoping Romelu Lukaku can build on last week’s winning goal against West Ham as he returned after a month out injured. The biggest absentee for the visitors will be Phil Jagielka as he is out with a hamstring problem.

When the sides met in the league in December it finished 1-1 in a typically tight affair and in their current situations I can’t see them being separated again and think it will finish with that same score-line in another close battle.