Mesut Ozil received fair bit of criticism for his lackluster performances in the last few matches, but the German superstar was back in form again, as Arsenal earned a 2-1 victory over Liverpool in the FA Cup tie yesterday.

Though Ozil was not directly involved in any goals or assists, but his overall contribution to the game was immense. 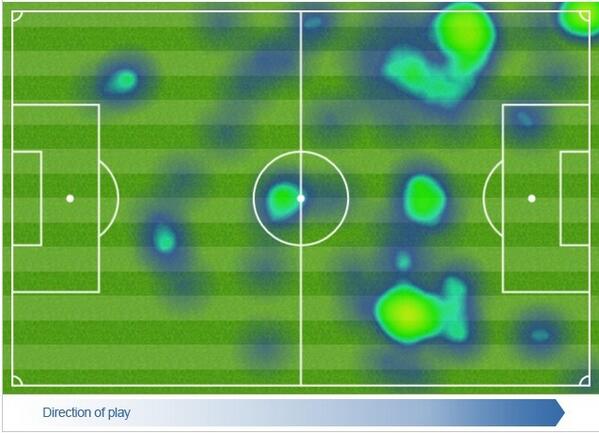 Take a look at Ozil’s heat map and you can see, he tried his best to influence the proceedings. He scythed pass to Oxlade-Chamberlain opened up the Liverpool defence completely leading to the second goal for the Gunners.

What was more pleasing for the Arsenal fans was his work-rate. He dropped down deep often to provide an extra body in the middle and constantly involved in every good move of Arsenal.

If anything last night proved was, Ozil looked superb as he had willing runners ahead of him, as it suits his game-style. Take note Wenger!

Let us take a look at some of the tweets, of what others had to say about Ozil’s impressive performance yesterday.

Ozil is a class act, but sometimes I get the feeling he’s just not interested, but that’s just his demeanour

Shows what a difference Ozil can make when he is able to aim for a runner with pace. Twice the player. — Wayne Veysey (@wayneveysey) February 16, 2014

Ozil is a lover who slips into your bed while you sleep. You only know he was there because you miss your period a few weeks later. — P.I.M.P. (@PoznanInMyPants) February 16, 2014

Weight and angle of pass from both Ox and Ozil superb. Wonderful weak footed finish from Poldi. #Arsenal

Let us know your thoughts about Ozil’s performance yesterday…