According to the ‘Daily Express’, Arsenal have secured a six-month loan deal with Real Madrid’s young striker Alvaro Morata; and yet, conflicting reports in the Spanish press claim that no deal has been agreed.

Spanish newspaper, Marca, have specifically addressed the Express’ claims, saying that according to Real Madrid sources, the 21-year-old Morata is not leaving the Bernabeu this January.

Used primarily as a substitute, having climbed off the bench eleven times this season, Morata has scored twice this season for Madrid. He is however in red-hot form for the Spanish under-21 side, with 12 goals in 11 appearances this year for ‘La Rojita’.

Despite Morata’s utility existence at the club, Madrid’s lack of recognised strikers (Karim Benzema being the only big name) should cause Carlo Ancelotti to think twice before allowing one of his forwards out on loan, at least not until he can enter the coming winter market. 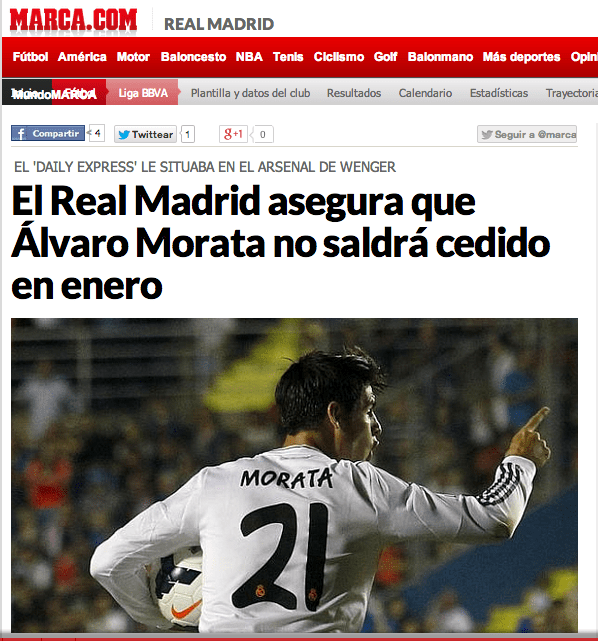 With the news that Sergio Aguero is on the Los Blancos hit list for the summer, strikers are indeed on the agenda at the club; but it remains to be seen whether they will bring in any in January, with the Madrid currently relying on goal-machine Cristiano Ronaldo.

Any Madrid exit for Morata would seem to hinge on Madrid’s dealings come January, but with Arsenal reportedly already seeing an €8m bid for Alexandre Pato rejected this week, the Gunners look to be moving forward quickly in their attempt to bolster their own sparse attacking front line.