One of the reasons why Arsenal failed to stay competitive till the end of the title race this campaign (as many feel) is due to their failure to land a top striker in the January transfer window.

The Gunners were heavily linked with a move for Gonzalo Higuain and Luis Suarez last summer but failed to land either of them, leaving Wenger with no options rather to rely heavily on lone striker Olivier Giroud.

This summer they must buy a top striker and not repeat the same mistake. Here we take a look at five such candidates who could join Arsenal in the summer.

The Frenchman was a target of Arsenal last summer but the Gunners chose to sign his Real Madrid team mate Mesut Ozil instead.

However, Benzema could be looking for a move elsewhere, with Arsenal could be a possible destination. According to reports, the North Londoners are plotting a £30m move for his signature.

Mandzukic has been in brilliant form this season, scoring 18 goals in 30 appearances. However, the imminent arrival of Robert Lewandowski means Mandzukic will no longer be the first choice for Pep Guardiola and could be one of the few players heading towards the exit door in summer.

Chelsea had shown interest in him, but the Blues are keen to secure the services of Diego Costa. A player of his qualities will be perfect for Arsenal. The prospect of getting regular games at the Emirates might interest him, if Wenger decides to bid for him.

Loic Remy was spotted at the Emirates earlier this month. Will he be an Arsenal player next season? Well, that remains to be seen.

The French international has scored 14 times in 26 appearances for Newcastle United this season. His future remains unclear, as he is set to leave Queens Park Rangers, with both Arsenal and Newcastle United interested.

Remy was included in France’s World Cup squad on Tuesday and is valued at £12 million. Alan Pardew recently admitted that they will not let Remy leave without a fight, if Arsenal show interest in him he might just head to Arsenal to play Champions League football next season. 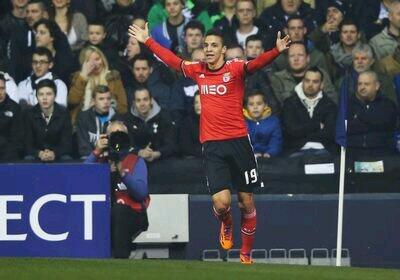 The Gunners will be hoping to sign the 22 year old forward, who has scored 11 goals in 25 appearances for Benfica this season.

Rodrigo started his youth career in Spain and joined Real Madrid at an early stage. He couldn’t make the grade at Santiago Bernabeu and moved to Benfica in 2010.

Recently, O Jogo reported Arsenal are interested in the Spanish youngster. Rodrigo was sold recently for €30m, plus €10 depending on performance to the investment fund Meriton Capital Limited in January. It remains to be seen if Wenger decides to sign Moreno for £28m , who is still an unproven talent.

Vela didn’t enjoy a great time during his stint with Arsenal but has been a sensational hit in La Liga.

The Mexican has had a great campaign again with Real Sociedad and if the reports are to be believed Arsenal have already secured his signature by triggering a £4m buy-back clause.

Do you agree with our choice? Who do you think should Arsenal buy this summer? Let us know below…