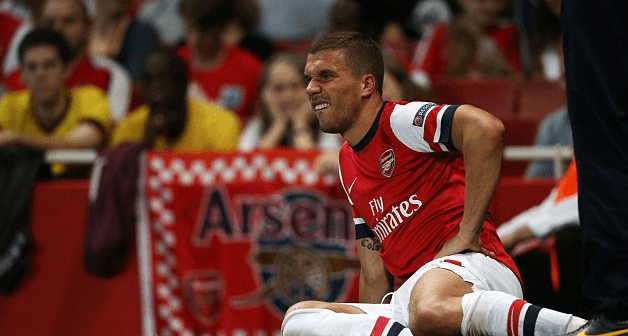 Following the news Arsenal’s left-sided forward Lukas Podolski will be out of action for up to 10 weeks, the Gunners now seem prepared to dip into the transfer market and find an adequate replacement.

The German international injured his hamstring after Arsenal’s 2-0 win against Fenerbahce in the Champions League qualifiers.

As expected, Arsenal supporters are even more desperate to sign some new recruits as their squad gets thinner and thinner with the injury list rising.

Real Madrid left-winger Angel Di Maria was said to be a target for the London side, but the Argentine international didn’t want to leave Madrid this summer.

While manager Arsene Wenger has played down his side’s desperate need for new faces, they are down to the bare bones, and have a very important London derby clash against fierce rivals Tottenham Hotspur.

Arsenal have missed out on every one of their summer targets, and are fast running out of time to buck the trend. With closest rivals Spurs taking their spending to over the £100M mark, Arsenal having spent nothing this summer puts them in a difficult position to retain their Champions League place for this season.

There aren’t too many names coming out of Arsenal that would be considered realistic signings at present. And although Wenger did previously have argument for not bringing in any fresh blood, when he had his entire first-team squad to choose from, injuries have dictated he now must spend.

After selling forward Gervinho a number of weeks ago, his money hasn’t been used to bring in any sort of replacement, but still Wenger and the Arsenal board are adamant the resources are there for spending – which begs the question, why haven’t they signed anybody?

The summer transfer window closes in just a few days and Arsenal have a number of positions they would ideally like to strengthen in. But will they?