Arsenal defender Thomas Vermaelen might be on his way out of Emirates in the summer as a possible move to Rafa Benitez’s Napoli looms large in the summer, claims TMW.

The Belgian has fallen out of favour and is down the pecking order at Arsenal as manager Arsene Wenger has persisted with the impressive central defensive partnership of Per Mertesacker and Laurient Koscielny this season.

The Belgian also struggled against Everton recently when his pace saw him chasing shadows as Lukaku constantly dragged him out of position throughout the game. The snap below shows how Vermaelen couldn’t cope with the movement of Naismith leading to the first goal of the game. 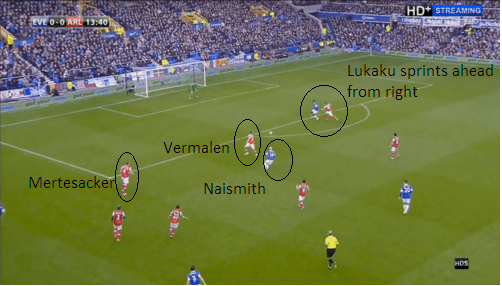 Vermaelen has only made 8 appearances in a injury ravaged season but has attracted interest from Rafa Benitez’s Napoli. We had earlier reported that Vermaelen was on the verge of leaving in the January Transfer Window but a deal failed to materialize.

However reports now claim that Benitez scrupulously followed the left footed defender during Arsenal’s 3-1 win over West Ham in midweek and lauded his versatility as Wenger deployed his former captain in a left back role.

The Partenopei are currently third in the Serie A standings but their defensive problems have been well and truly documented this season. Benitez’s side look extremely tame at the back and have conceded a whopping 35 goals this season. The former Liverpool boss is also after Belgian side Racing Genk’s defender Kalidou Koulibali but that shouldn’t stop him to pursue Vermaelen.

Napoli’s official magazine reports that Rafa spoke with Wenger having informed him that the Belgian is in his wishlist for the summer.  Vermaelen’s contract is set to expire June 2015 hence Wenger would not risk to see him leave on a free transfer. The same was also reported in Italian newspaper Julie News.

Napoli fans forum however have taken the story a bit forward saying Vermaelen’s representative met the club Sporting director Ricardo Bigon with an agreement being made at agreement will be found around €5m including bonuses subjected to appearances and results.

@tc917 they are on verge of signing Genk’s Koulibaly, not sure they would buy another starting caliber CB (IMO they should)