Arsenal defender Bacary Sagna is almost certain to leave the club. The French full-back is out of contract in the summer, and is planning a Bosman transfer to Turkish club Fenerbahce, according to L’Equipe.

Arsenal manager Arsene Wenger insisted despite the club offering a three-year-contract, the talks are not progressing. 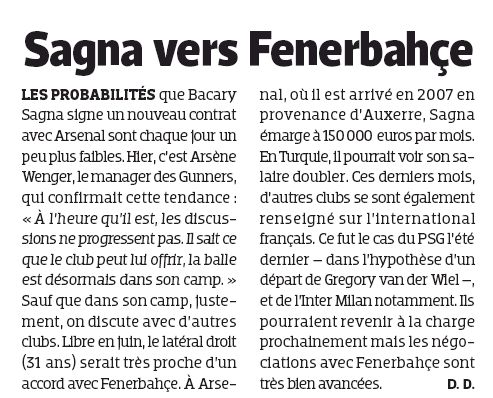 “At the moment, the talks are not progressing,” Wenger said as quoted in The Guardian. “We know what we want from him, he knows what is on the table, and that’s where we are. The ball is not in our camp any more. It is in his camp, and he needs to come back to us.”

Wenger is keen keep Sagna at the club and is even prepared to break the policy of granting only one-year extensions to players in their 30s.

L’Equipe suggests that Sagna is close to agreeing a deal with Fenerbahce where he would double his salary. Sagna currently earns £50,000 a week at the Emirates.

Meanwhile, Arsenal boss Arsene Wenger has dropped a bombshell on his future, suggesting he would commit his future at the North London club.

The Times journalist Rory Smith reported earlier that Monaco are preparing a 13m offer that would make Arsene Wenger one of the world’s best-paid coaches, as they are expected to part company with Claudio Ranieri.