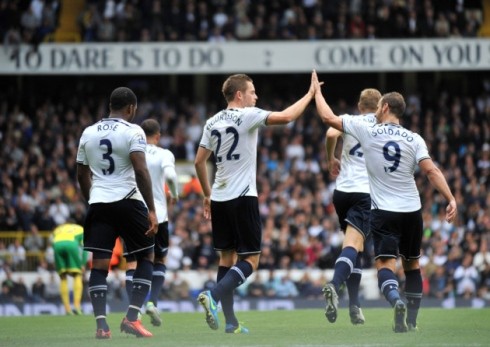 After round four of the Premier League we have both the North London clubs and Liverpool sharing same points at the top of the table. And Liverpool may well go three points above of the two London clubs, should they win against Swansea tonight at the Liberty Stadium.

Well, these are early days in the Premier League. Such temporary movements in the league table hardly leaves us with any definitive conclusions. But, two things are day light clear. First, this season will be a one hell of a competitive season where three potential title challengers will be given hard time by the three occupying the top three places at the moment. Secondly, early indications are showing that gaps with the potential title challengers – Manchester United, Manchester City and Chelsea – have been bridged to a great extent.

Arsenal have bounced back strongly after their opening day defeat at the hands of Aston Villa and have won three consecutive matches since then. And with record signing Mesut Ozil in the side now, the Gunners are not only aiming to clinch the top four but an outside shot at the title cannot be ruled out either.

Likewise, expectations are high from Spurs as well. They have assembled a solid team and all they need is to give their new players the required time to gel. And in the meantime, staying on top doesn’t give off a bad feel either.

Same goes with Liverpool. Although the Reds do not possess that strong a team as compared to other big guns but the team-spirit within the camp is driving them forward. And Rodgers will use that as an impetus and weapon to move ahead. The team can only improve once Luis Suarez returns from his suspension.

On the other hand, Chelsea, City and Man Utd are still looking to find a sniff of stability. Jose Mourinho’s side was beaten by Everton and the Portuguese admitted that a lot of work needs to be done to sculpt the squad, according to his own taste.

Likewise, on paper, Man City looked like a team who will run away with the title at a canter. Even Pellegrini was so confident that he said his side is the best in England. In reality, City have failed to win a single away game so far, suffering one defeat in the process.

Similarly, Manchester United are also looking to regroup after having a stuttering start to the season, losing and drawing against two potential big teams.

One of the main reasons why the title race promises to be so exciting is, all the three potential title challengers (predicted by almost all the journalists) are going through a re-building season under a new manager. So, it may happen that all the three clubs may struggle in the opening half of the season and might fail to deliver on a consistent basis, which in turn would allow Arsenal, Liverpool and Spurs to bridge the gap.