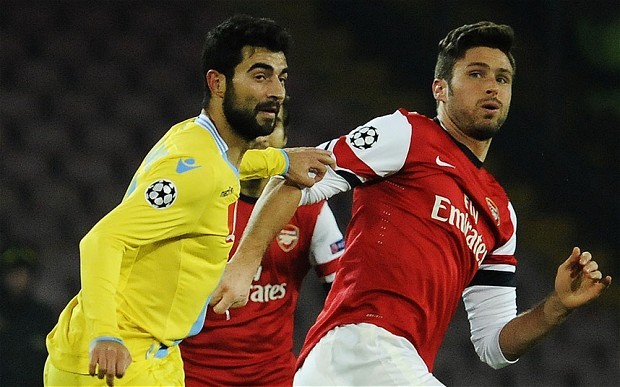 Arsenal were beaten 2-0 by Napoli on Wednesday night but the result was enough to see the north London side progress to the knockout rounds of the Champions League at the Italians’ expense.

Goals from Gonzalo Higuain and Jose Callejon gave Rafa Benitez’s men victory, while Mikel Arteta was sent off in the second-half for two bookable offences.

Here are the Arsenal player ratings for the clash with Napoli.

Was not called into the line of duty very often and could do nothing about either of Napoli’s goals. Relatively competent in everything asked of him.

Put in a solid performance but was caught out on occasion positionally, with Christian Maggio getting in behind him at times.

Alongside Koscielny Arsenal never looked like conceding three goals, and the giant German was a commanding force at the back for the visitors. Was turned for Napoli’s opener however.

Made one mistake to allow Callejon through on goal, but tracked back well to close the Spaniard. Put in some strong tackles, made interceptions and kept Higuain relatively quiet.

Looked unsure of himself on the ball on occasion and found Armero a tough opponent to deal with. Played his part in getting Arsenal through to the next stage, but does not have the quality of Bacary Sagna.

His sending off is naturally going to bring his rating down, but before his dismissal Arteta put in an important showing for the side. Anchored the midfield and broke up Napoli play.

Arsene Wenger’s decision to bring him back into the side paid dividends, as Flamini was disciplined in his positioning, barked orders at team-mates and won the physical battle in the boiler room.

Preferred to Aaron Ramsey and Jack Wilshere, the Czech Republic international was tireless in his work-rate and always available to receive possession.

A largely anonymous display from the German. The game was never going to overly suit Ozil given the defensive thoughts in the Arsenal psyche, but the former Real Madrid man had little influence on proceedings.

Showed a number of clever touches on the ball and did what he could to inspire Arsenal in the final third before being replaced.

Largely isolated, Giroud did not stop trying and was a good out ball for the Gunners to relieve pressure. No real sights of Napoli’s goal, but did his part in getting the side through.

A more defensive option when replacing Cazorla, Ramsey helped Arsenal see the game out without having a chance to show what he is capable of in the attacking third.

Did not track back and safeguard his defence as much as Arsene Wenger would have liked, but didn’t do anything overly wrong.