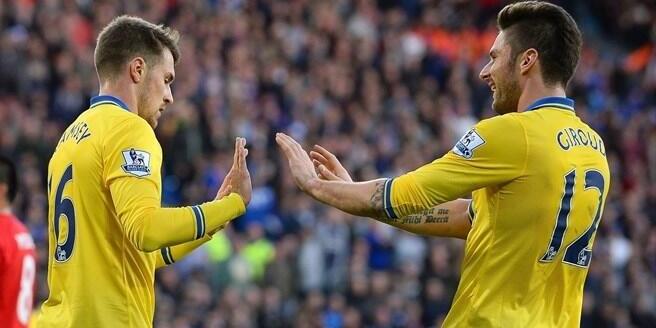 Arsenal overcame a stubborn Cardiff side on Saturday in the Welsh capital; coming out 3-0 winners, with Aaron Ramsey returning to haunt his former side with a devastating double.

Arsene Wenger’s side now sit seven points clear at the top of the Premier League, after grinding down Cardiff, who kept themselves in with a shout for a long period of the match.

Ramsey was the difference for the Gunners; with his two fine goals a just reward for the attacking industry shown by the young midfielder. Mesut Ozil was true to his nickname of ‘Assist King’, setting up two of the three goals – the second a delicious pass for Mathieu Flamini to fire in.

Was called into action only a few times by the Cardiff front-line, and was equal to the task; clawing away a fine Frazier Campbell header in the second half, and stayed strong to claim his fourth clean sheet from the last five league games.

A solid performance from the Frenchman. Sagna put himself about, and linked up with the attackers consistently well. Some suspect crosses aside, he should be pleased with his contribution.

Mertesacker has been one of Arsenal’s best performers of the season so far; and the big German had another good game in South Wales. It was not the most strenuous afternoon for the Gunners’ defence, but Mertesacker and co. dealt well with the few dangerous forays that Cardiff mustered.

Another good showing from the 28-year-old, who put the Cardiff front-line in their place throughout. A key member of the Arsenal rear guard; he and big Per have formed a valuable defensive connection.

Not his best game by a stretch. Although Gibbs tried hard, he almost cost the Gunners with a lapse at the back that allowed Campbell to climb above him and register Cardiff’s best effort on goal.

Accomplished and composed; Arteta showed good distribution, intercepted well in midfield, and kept the Gunners well-drilled in the middle of the park.

Not as dynamic as his goal-ridden performance against Marseilles midweek; young Jack was still solid in the centre, contributing to nearly every promising move. Came off for Nacho Monreal late on.

The man that can do no wrong! From hero to zero in the space of a season for the Gunners; it was lovely to see the Cardiff fans still treat their former man with huge respect after each of his two goals. Dynamic and confident, Ramsey’s season keeps getting better and better.

Flitted in and out of proceedings; yet still showed great touch and poise when involved in attacks. Could have done better with an effort in the second half, but was a valuable piece in the Gunners’ midfield chain.

Came off for second goalscorer, Mathieu Flamini, who took his chance superbly from Ozil’s pass.

The German maestro was at his creative best on Saturday, with another two assists to add to his league-high six for the season. Still not the best at tracking back; his attacking talents were however, quite plain to see. Came off for Theo Walcott late on.

An average showing from Arsenal’s only viable striker; Giroud was unlucky not to have scored with a second half effort, but was guilty of wayward strikes throughout.

Will be thankful to his midfield for bagging the goals; the Frenchman needs to, and can be more clinical.

What do you think? Can Arsenal keep it going? Let me know in the comments below.