Welcome to the daily Arsenal column at Soccerlens where we delve into all things Arsenal, ranging from post-match reactions to manager interviews. Also in store are some tit-bits from the transfer front, as well a look around at what is happening in the social media circles. And as mentioned, every thing in here is Arsenal.

Arsenal romped to a comfortable and surprisingly one-sided win over Manchester United yesterday afternoon in a top of the table clash which now sees them rise up to second in the table, moving ahead of United in the process. An accomplished and cultured display which reflected well on the 3-0 scoreline, this was exactly the fillip the north Londoners needed after a depressing week which also included a home Champions League loss to Olympiakos.

Captain Per Mertesacker stressed the importance of the win and owed it to the frontfoot start when they scored two goals in the opening seven minutes. “I think it was vital for us to stay [near] the top of the Premier League. The distance between us and the top is not far, so it was vital. Also the way we started the game was good for us and very important,” he said to Arsenal’s official website.

Meanwhile, midfield maestro Santi Cazorla offered his two cents too, and attributed the win to the club’s mentality and focus after losing their way midweek. He said: “We needed to believe after the loss against Olympiakos. We needed to change the mentality and today the team was very compact and focused for the game against a big team. This is the most important thing for the team.”

Theo Walcott, who provided two assists, has refused to get carried away and urged consistency from the team. The forward added: “That desire was there, but we need to show it in every single game now, it can’t just be one offs.” Midfielder Aaron Ramsey also joined the party and expressed his delight at the result, saying: “It’s always nice to beat Manchester United and we will enjoy this win tonight.”

Arsenal’s start to the 2015/16 campaign hasn’t exactly been along expected lines but yesterday’s win gave manager Arsene Wenger the chance to finally issue a statement about the Gunners being one of the title favourites. Arsenal came into the match yesterday having not beaten United in the league for four years, but gave a glimpse of their potential in what was a convincing win.

The big bit of news that overshadowed Arsenal’s win yesterday was that of the sacking of Liverpool manager Brendan Rodgers. Rodgers, who was the second longest-serving current manager in the Premier League after Wenger before getting the axe, had his reign cut short after a disappointing draw in the Merseyside derby against Everton. Wenger sympathised with the Ulsterman, and wished him luck for the future. 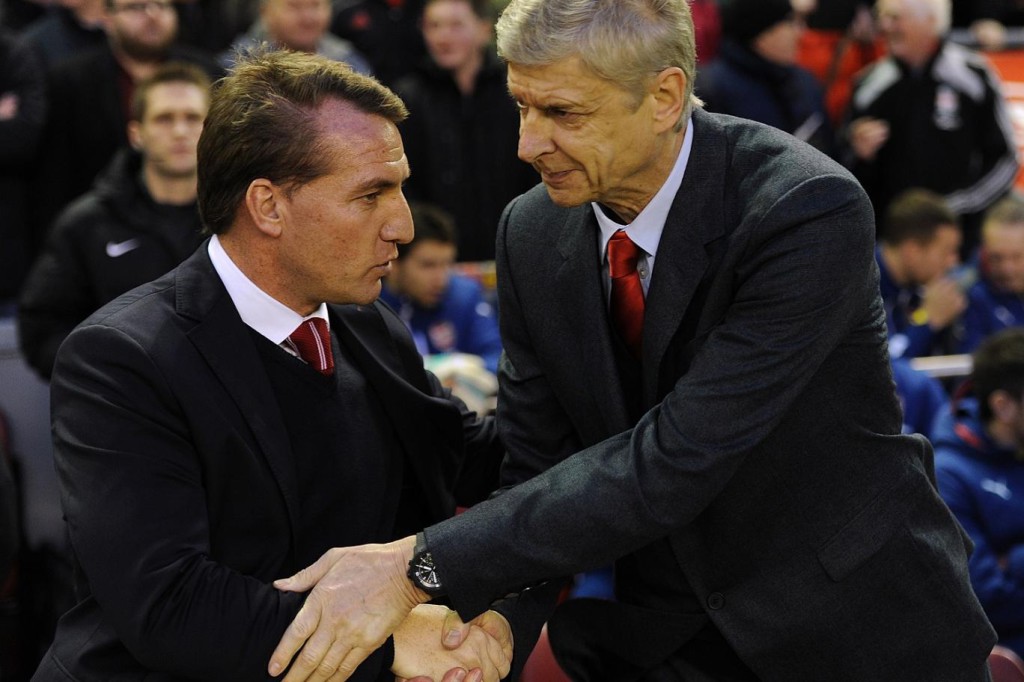 “I’m always sad when that happens as I think he is a quality manager. Unfortunately the pressure is always bigger on the managers. I think what he has done at Liverpool, he was very unlucky to not win the Premier League. He was closest certainly to winning the Premier League in all the managers that have been working for the club but that is the way it goes now and I wish him good luck. I’m sure he will find a job again,” the Frenchman said.

Alexis Sanchez, who scored twice against United yesterday, is suffering from a minor groin injury, but will be allowed to travel back to his homeland for international commitments. Sanchez started the season with little to no productivity but has suddenly come to life in the last three games, scoring six goals. It is little secret how enthusiastic the Chilean is, and he surely wouldn’t want to miss any action when in a rich vein of form.

Wenger updated his injury status, after he was taken off in the 81st minute yesterday, and hoped his star returns from the international break in good shape. “He has a little groin problem. Unfortunately he goes to Chile. You cannot stop him from going to Chile and he loves so much to play for his country and he will play against Brazil [on Friday] and Peru [next] Tuesday so the game at home against Brazil he will not want to miss. Hopefully he will come back in good shape,” said Wenger.

On to the transfer front now, and we begin with the new, lucrative deal lined up for Sanchez. We reported yesterday sourcing the Mirror, the Chilean will get a pay-rise that will take his wages to £130,000-per-week, and talks are expected to be held before Christmas.

According to Spanish outlet Fichajes, Gonzalo Higuain could become the latest big transfer to the Emirates, as Arsenal are in a race with Liverpool to tempt the Napoli striker to England once the transfer window opens. We all know Arsenal’s shortcomings in attack, but Higuain will require some tempting to switch clubs mid season.

Meanwhile, Calciomercato reports that Arsenal are closely monitoring Benfica’s Portuguese right-back Nelson Semedo, if the disillusioned Mathieu Debuchy leaves the club in January. While there could be a return to the club for former starlet Oguzhan Ozyakup, who currently plays for Besiktas. The 23-year-old midfielder, who left Arsenal in 2012, is interesting many clubs, and according to Turkish Football, Arsenal are one of them.

Social media concerning Arsenal was in the highest of spirits following yesterday’s win, and Mesut Ozil got in on the act quickly to express his delight at the win.

While celebrity Gooner Piers Morgan had a dig at beleaguered Man Utd captain Wayne Rooney, who had one of his worst days having always been a good performer against Arsenal.

Here if you need me mate @waynerooney.