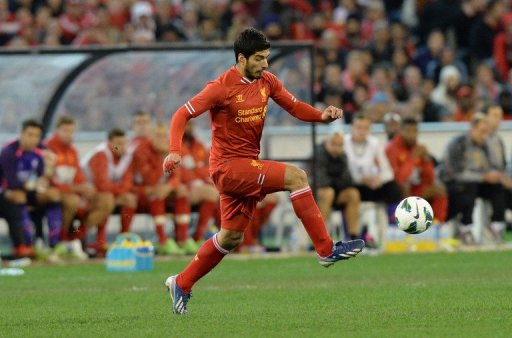 Luis Suarez’s ever-growing repertoire of outrageous attacks on fellow professionals, which often shroud his obvious talent and ability, has done little to circumvent his allure to the biggest clubs in the current transfer market. Arsenal have shown a lasting interest in the high-flying, low-hitting Uruguayan, and the ensuing transfer saga looks to dominate headlines right the way up until its conclusion.

Suarez has been the subject of two big-money bids from Arsenal, with the most recent an unorthodox offer of £40m and a further £1, tactically put forward so as to activate a clause in the striker’s contract, enabling him to converse with any club meeting the required price. Liverpool have dismissed the offer, with owner John Henry even taking to Twitter to enquire as to the recreational habits of the main-men at Arsenal.

Suarez meanwhile, ever the headliner, has demanded to speak with the Arsenal camp, as his wish to leave Anfield becomes more and more evident, to the dismay of the Liverpool faithful.

It seems to me that the star-striker, record goal-scorer for Uruguay with 35 goals in 69 games, has become more than just another transfer battle, but now represents a potential future for either Arsenal or Liverpool.

Both can be referred to somewhat as ‘sleeping giants’, due to Arsenal’s  lack of silverware this past decade, and Liverpool’s diminishing sphere of influence on both domestic and European fronts. Arsenal are still consistently active within the Champions League, but with the rise of Serie A (specifically big-spending Napoli, and the imperious Juventus), as well as German clubs’ successes last year, a return to prominence for the two historically successful clubs has become even more imperative.

Luis Suarez would be an ideal weapon to propel either side towards a bright future.

The malevolent Suarez, as volatile as a Mexican fireworks festival (just with a few less casualties), arguably has the potential to be the best striker in the world.

Ignoring a frustrating opening season at Anfield, where he was the subject of ridicule due to a quite ludicrous shots-to-goals ratio, the striker has been as prolific as they come for both Liverpool and his former club, Ajax. Scoring more than a goal every other game for the Dutch giants, and so far notching up 51 goals in 96 games in England, Suarez can be considered a ‘goal machine’.

But his game, like many great strikers, is not centred wholly on his goal scoring ability. The forward’s vision, deft touch, box of tricks, and eye for the spectacular make him a rather special quantity.

Liverpool were the beneficiaries of Suarez’s abilities last season, with the striker grabbing 30 goals and 11 assists in 44 games. Ever the last grasp hero for the club, he thrived on the challenge of clawing an often floundering Liverpool from the jaws of defeat, into the arms of victory.

He was also able to forge a decent partnership with January signing, Daniel Sturridge, and the pair dovetailed each other gracefully, putting defences all-round the country to the sword. Sturridge himself scored 11 goals in just 16 games last year.

Their partnership, coupled with the dynamism of young talent and other January signing, Coutinho, and the solid foundations secured by Anfield stalwart, Steven Gerrard, made Liverpool a fluid, free-scoring beast during the second half of last season. 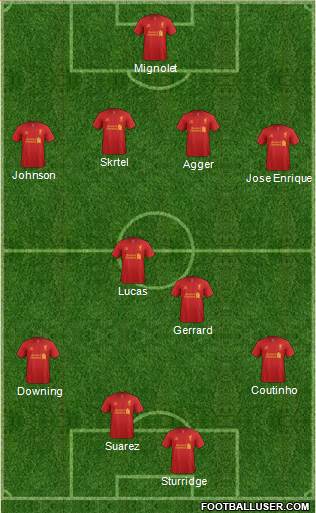 With the signings of Iago Aspas, and Luis Alberto, Brendan Rogers has supplied both competition and further creativity for his ace player. Liverpool, quite rightly, are building a future around Luis Suarez; a player, like Gareth Bale is for Tottenham, that can almost single-handedly put the club back on the map.

But with Champions league football continuing to elude the Anfield outfit, the danger of losing Suarez to a team competing in the world’s biggest club competition is quite real.

Since Robin Van Persie deserted the Gunners last year, to ply his trade for eternal rivals, Man Utd, a new striking hero has yet to materialise for the club. Marouane Chamakh has further highlighted, rather than remedied the void left by the brilliant Dutch striker; Lukas Podolski has been used effectively across the forward line, but without a huge goal return; and Olivier Giroud has shown flashes of quality, but has not managed to appease the Gunners faithful.

Luis Suarez would fit brilliantly into the Arsenal setup; a setup that has, for the majority of Arsene Wenger’s tenure, been centred around style, poise, and adventure, which are arguably three of the Uruguayans main strengths. 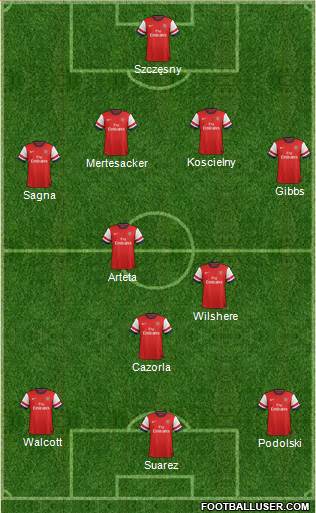 Wenger has recently dabbled with the idea of playing a target man up top, as the likes of Chamakh and Giroud have shown. Due to the limited success of this tactic, a return to the free flowing, complex forward play of yesteryear may be the perfect tonic for a team so rich with attacking fluency.

Santi Cazorla’s obvious playmaking ability, Wilshere’s destructive forages, and Arteta’s assured distribution would make for a veritable hub of creativity for the equally proficient Suarez to feed off of. The double act of Cazorla and Suarez, the shapes they could throw and patterns they could thread, would be a treat for any lover of the beautiful game.

The rampaging Walcott and the more incisive Podolski, both coming off of either wing so as to interact with the front man, would also hold great promise coupled with the space-freeing qualities of Suarez’s tenacious, Tevez-esque style running.

Diego Forlan, former United striker, and Suarez’s compatriot for the Uruguayan national side, has spoken of his belief that the box-office striker can be that last piece of the jigsaw for the Gunners,

Forlan told reporters: “Of course, Arsenal are a very strong team, but, for the last years, they have not been able to compete with Manchester United, Manchester City and Chelsea for the title.

“They have had very good players, but have maybe lacked that one special player who you need to win a league as strong as the Premier League.

“United have had Wayne Rooney and Robin van Persie and City have had Sergio Aguero and Carlos Tevez. But Arsenal have struggled since Thierry Henry left.

“If they manage to sign Luis, then I think, with the players they already have, they would be serious title contenders again.”

Arsenal’s pursuit of Suarez is also a huge sign of a change of philosophy at the club. Not only would the club’s transfer record be shattered, but a marquee signing would be of real importance to a club so true to the ideal of creating stars, rather than purchasing them.

The future of Luis Suarez will have real effects on the futures of both Arsenal and Liverpool respectively. The striker is undoubtedly magnificent, and his presence in either team could herald the re-arrival of silverware and glory on potentially every stage. The past may be of lasting significance to the two English giants, but the Uruguayan could well be the catalyst for a new chapter of excellence for either club; a leap is now required of Suarez, either a leap of faith, or a leap into the unknown.