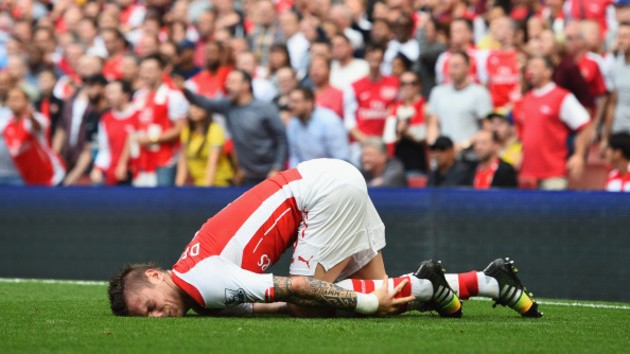 Arsene Wenger met with the press on Monday ahead of his side’s Capital One clash against Southampton on Tuesday night.

The Arsenal manager was giving updates on the injuries sustained by a number of his players recently and it wasn’t the best of news.

Nacho Monreal, out with a back injury he picked up last week, was expected to return for the game against Aston Villa at the weekend. But, in true Arsenal fashion, the injury has turned out to be worse than feared and he will now be out until after the next international break in mid-October.

Yaya Sanogo will also be out until the middle of next month with the ‘minor’ hamstring problem he picked up while Serge Gnabry, out since the end of March, and Theo Walcott, out since January, both with knee problems, are only set to return to training after the break.

The Gnabry situation is an interesting one. The update given by Wenger on Monday is one of only a handful regarding the young German. While we know he was out with a knee injury, the specifics haven’t been revealed, but for it to have kept him out for over six months it must surely have been a cruciate injury. Quite why Arsenal kept this quiet is anyone’s guess.

Walcott was expected back in to full training at the end of August so it would be natural to assume that his recovery is taking slightly longer than expected. This is not unusual, especially when it comes to cruciate injuries, but Arsenal’s lack of information can be more than a little frustrating at times.

Wenger also revealed that Mathieu Debuchy underwent surgery and will be out for around three months. Of course, three months in the land of Arsenal can mean a lot longer than that but the club will be hoping that the Frenchman hasn’t acquired quite enough Arsenal DNA during his short time at the club to suffer from the set-back bug that afflicts so many Arsenal players.

Arsenal will be expected to make a host of changes for the game on Tuesday with David Ospina, finally recovered from his thigh injury, ready to make his debut for the club in place of Wojciech Szczesny. A lack of options in defence could mean that Kieran Gibbs will play at left-back unless Wenger opts to play Francis Coquelin or Mathieu Flamini there. Risking Laurent Koscielny or Per Mertesacker, the only two fit senior centrebacks at the club, would be madness with Tottenham and Chelsea on the horizon, so Isaac Hayden, who wasn’t included in the under-21 side that played Newcastle on Monday night, is likely to come in to the side alongside Calum Chambers. Hector Bellerin will come in at right back.

Abou Diaby could start after his lengthy lay-off. On the bench for the game against Villa, the midfielder completed 90 minutes for the reserves the week before and is hopefully ready to get his career back on track.

In midfield Arsenal do have a number of options unlike in defence. Tomas Rosicky will be hoping to get a start, however anyone hoping to see Gedion Zelalem at some point will be disappointed as the youngster played the full 90 minutes for the under-21’s on Monday, as did Dan Crowley.

Wenger confirmed that, along with Hayden and Bellerin, Chuba Akpom and Semi Ajayi will be in the squad for the game. Joel Campbell and Lukas Podolski are another two who will be hoping for some gametime .

The Arsenal manager has something of a conundrum ahead of the game. Short in numbers he can either rely on youth, knowing that the Saints will offer a stern test and there is the very real chance of them not being able to cope, or plump for a more senior side to try and guarantee qualification for the next round while risking injury ahead of crucial Premier League and Champions League games.

No doubt Wenger will have faith in whichever side he puts out, but with injuries, once again, starting to bite at the club, this is one competition that might just be a step too far for Arsenal this season.

But, as we saw at the weekend, football is unpredictable. Who knows what might happen.