Real Madrid midfielder Sami Khedira’s future has been well speculated in Spanish media. The German midfielder and World Cup winner had an injury plagued campaign last term and could leave Madrid in the summer.

Catalan newspaper Sport published yesterday that Arsenal have more-or-less secured a deal for Khedira. He will sign a four-year-deal while will demand a €10m salary per year. Goal.com, with yet another Exclusive, claim that Khedira is demanding a wage in the region of £200k-per-week which Arsenal aren’t going to pay. 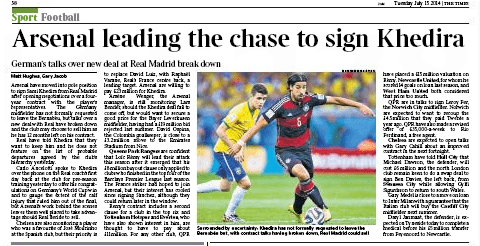 According to reports from The Times, Arsenal are in pole position to sign Khedira. They have opened negotiation over a four-year-deal with the player’s representatives. Although Khedira has not formally requested to leave Madrid, but talks over a new deal has broken down and with only 12-months left on his contract the Bernabeu outfit may choose to sell him.

However, the reality is, Madrid are not keen to sell him at the moment. Carlo Ancelotti has spoken to Khedira over the phone to offer his congratulations on Germany’s World Cup victory, but The Times reckons Arsenal are working behind the scene that leaves them in pole position to sign the 27-year-old, should Madrid decide to sell him.

Arsenal are willing to pay £23m for khedira while Chelsea are also monitoring the player, who was a favourite of Jose Mourinho at the Spanish club.