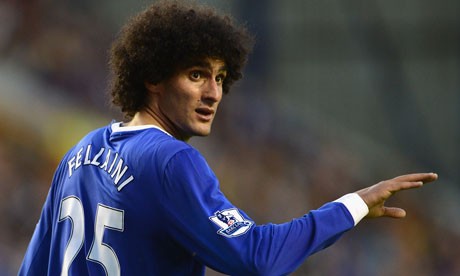 The Gunners are reported to have activated a £22 million release clause in his current contract with Everton, which could see them beat Manchester United to the signing of the midfielder.

However, there are potential problems with Arsenal’s bid and challenges they will face in making the deal a reality.

That could be a huge pulling factor in Fellaini’s decision over where he goes next in his career and it would be easier for him logistically to complete a move to Manchester United.

United have also reportedly been following him for most of the season, ever since his brilliant performance against United in that 1-0 victory at Goodison Park in their first game of last season.

All Arsenal have seemingly done is force United’s hand and if they better Arsenal’s reported release clause offer, then he will always choose Old Trafford over a move to the Emirates Stadium.

“We all know the situation at Everton. We all know there’s a player who’s got an escape clause, but the others are not for sale,” said Everton chairman Bill Kenwright.

Roberto Martinez will also have a say in this deal as the new Everton boss because at the moment, he controls the player.

Martinez stated that one of his immediate priorities for the club was ensuring that their key players remained in the side, which will allow Everton to push forward and grow next season.

He’s stated that he only wants to add to the squad to increase the competition for places rather than allow the best players to leave.

“When you are successful, and Everton were clearly very successful last season, you will always get interest in players from other football clubs – We need to invest and bring players in which will allow us to start this season with a stronger team,” Martinez told the Press.

He will not be happy to see one of his most important and senior players leave before he’s even had a chance to work with him and talk to him over his future.

Arsenal could certainly afford any Fellaini deal because their financial strength was well publicised last season, with figures released showing they had over £100 million in the bank in the form of a cash reserve.

That can be released quickly to allow the club to go after key signings but the scale of the problems Arsenal face in terms of landing Fellaini may put Arsene Wenger off from completing the deal.

There is also a very good chance that Fellaini himself could reject any move to North London because there is no guarantee of a place for him in the side.

He’s been at his best for Everton when he’s played as an advanced and attacking midfielder but Arsenal already have Santi Cazorla, Jack Wilshere and Mikel Arteta who can all play that role in the current side.

The difference between this reported bid and Manchester United’s interest is that United have a manager who knows the player inside out, they can offer him a guaranteed chance of winning silverware and there is a direct need for him in their team.