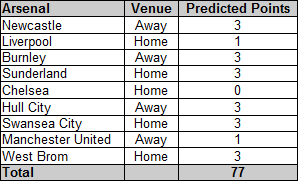 Arsenal will face Crystal Palace in the first game of the 2014-15 Premier League season at the Emirates on August 16.

The Gunners dominated first half of the previous campaign and were on top of the table for most part of the season. However, injuries and poor form early this year saw Arsene Wenger’s side just finish the season in top four.

September is a very crucial month for Arsenal as they face Manchester City first on September 13 at home, before hosting the first North London derby against Tottenham Hotspur in the final week of that month.

They face Manchester United in their 37th game of the season at Old Trafford before facing West Bromwich Albion for the final game.

You can now see all of #Arsenal's draft Premier League fixtures for the 2014/15 campaign in our special infographic! pic.twitter.com/yVfYG8xiTY