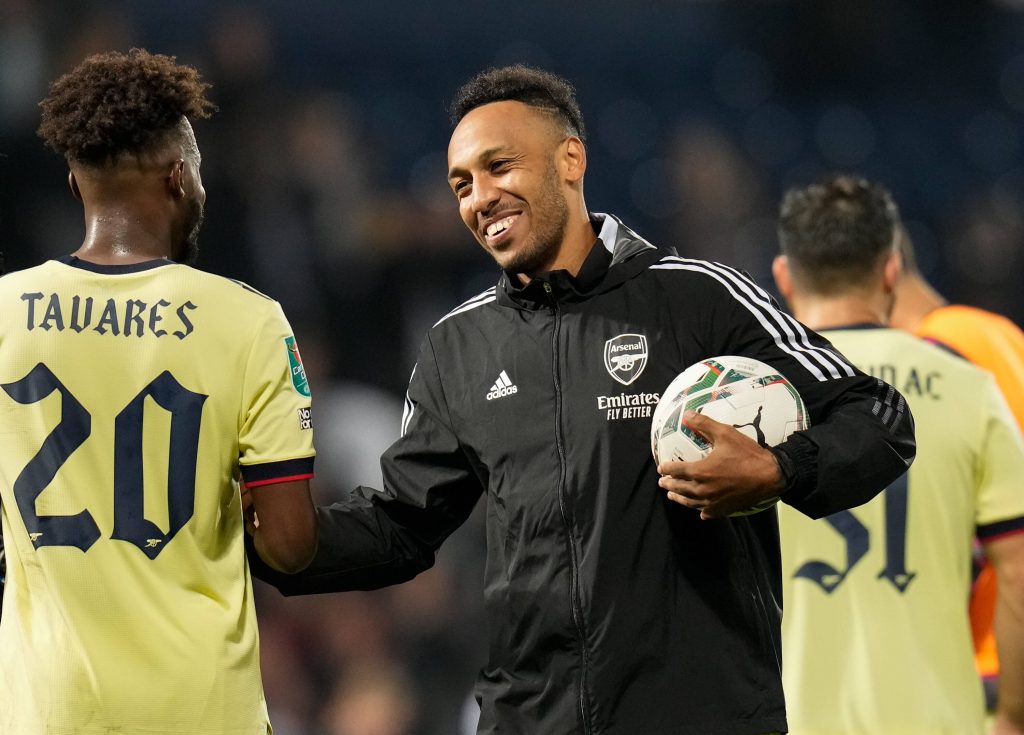 A selection of Arsenal fans were pleased for Pierre-Emerick Aubameyang as he grabbed a hat-trick in the 6-0 win over West Bromwich Albion on Wednesday.

The Gunners made the trip to the Hawthorns for the Carabao Cup second round tie, and they were clear favourites when the matchday squads were put up.

Baggies boss Valerien Ismael handed surprise debuts to six academy players. It was expected that the Gunners would win comfortably on the night.

They still needed to produce a strong performance after back-to-back league defeats, and Aubameyang stood out with a hat-trick alongside an assist.

He scored his first two goals with simple tap-ins while assisting Nicolas Pepe before the break. His bicycle kick ended up into a nice pass for the Ivorian.

Shortly after the hour mark, Aubameyang appeared at his vintage best, cutting inside from the left flank before curling his shot into the far corner.

The Gabon star bagged the third hat-trick of his Gunners career. Some fans were pleased and believe it should boost his confidence going forward.

Aubameyang hattrick, two clinical finishes and a beautiful strike for the third. It’s positive, the start of a Remontada I hope!

That goal is the old Aubameyang right there, more of that man 👏🏾👏🏾

I love the fact that Aubameyang looked sharp tonight, Odegaard likes he's been here for ages.

Loved what I saw ❤️

Personall family issues. Struggles. Malaria. COVID. All in the space of a year.
It is only West Brom, but look at the celebration. Aubameyang is a showman. He needs the fans to fuel him with enough confidence to perform to his very best, and I hope our captain is back! I believe!

Any hope of this season being a good one rests on Aubameyang firing. The team needs goals in the PL, and he could provide a large chunk of those.

4 G/A tonight should be a nice confidence booster.

All jokes aside i’m happy for Aubameyang, he’s gone through a very hard period. Personal issues, poor form, Illness glad he’s finally back on the scoresheet, it’s a much needed confidence booster.

Aubameyang had a tough 2020/21 campaign with just 15 goals across all competitions, and his start to the current season has been far from ideal.

The €25 million-rated star missed the trip to Brentford due to coronavirus. He was only fit to make a second-half appearance in the 2-0 derby defeat to Chelsea on Sunday.

The hat-trick against the Baggies should be a confidence booster for the 32-year-old ahead of Saturday’s trip to Premier League champions Manchester City.

The Gunners are 19th in the standings after successive league defeats and can’t afford to go into the international break with three losses to start the season.

They face a tough challenge on their hands against the Cityzens, who secured a convincing 5-0 win over Norwich City at the Etihad Stadium last weekend.

Aubameyang needs to be at his best if the Gunners are to come out with something from the game. The club have lost their last eight league matches against City.