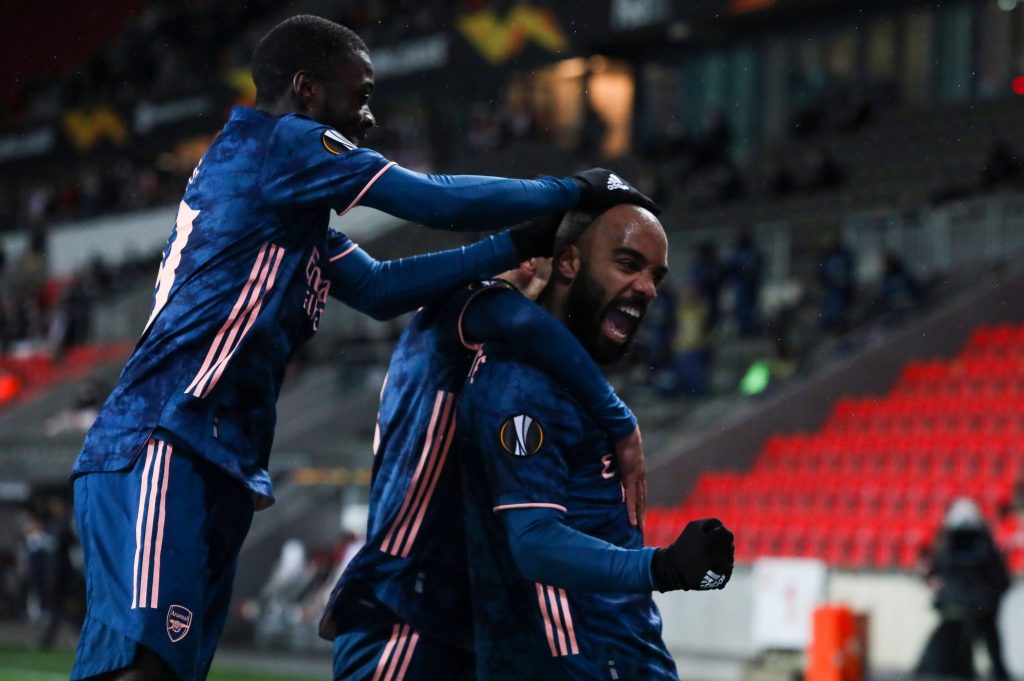 A selection of Arsenal fans were delighted for Alexandre Lacazette after he bagged a brace in the club’s comfortable 4-0 win over Slavia Prague in the Europa League last night.

The Gunners played out a frustrating 1-1 draw in the first leg of their quarter-final tie, but they had to score at the Sinobo Stadium to stay in the competition.

Bukayo Saka had his curled effort terrifically saved by the goalkeeper in the 15th minute, but Emile Smith Rowe managed to tap in the rebound.

However, the goal was adjudged to be offside by the slimmest of margins after an extended VAR review which took more than two minutes.

The Gunners quickly put the disappointment to bed, with Smith Rowe showing terrific composure in the box before assisting Nicolas Pepe’s goal in the 18th minute.

Just three minutes later, Saka was fouled in the box. Captain on the night, Lacazette converted the resultant penalty as he sent the goalkeeper the wrong way.

Moments later, Saka finally got on the scoresheet as he beat the goalkeeper at the near post with a composed finish after a clever assist from Calum Chambers.

Slavia were unable to reduce the deficit before the break, and the same was the case during the second half before Lacazette scored the Gunners’ fourth goal.

Lacazette was poor with his finishing in the first leg but made amends by showing quick feet before firing a shot with his weaker left foot.

There were many standout performers on the night, but some of the club’s faithful were delighted with the impact from the skipper.

Lacazette looks like a completely different player when he’s surrounded by runners (ESR, Saka, Pepe and Martinelli). He’s the Firmino of this team, needs runners around him. Never ever play Willian and Laca in the same team again. #SLAARS

Lacazette Beautiful. The stop, the shift onto the left & the finish 😉 2 goals for Lacca, Pepe a goal and a assist & ESR & Saka been immense as well as the whole team tbf. Worked these lot & breezed into the semi finals. Bring on Unai Emery’s Villarreal #UEL
Arsenal ❤️

Lacazette's so underrated. What a player 👏👏 #Arsenal #SLPARS #AFC

Lacazette’s second goal was unreal, like the Lacazette of old during his Lyon days. Quick feet and a powerful weak foot finish.

They gave Lacazette the captain's band and has been in superb form. This man is going nowhere this summer

Lacazette has been on fire this season.

We need this Lacazette to turn up in the semi final and the final if we make it. Very dangerous player.

He was solid the last time we made it to the final, against Valencia and Napoli, but then ghosted in the final.

Lacazette looked out of sorts in the opening leg against Slavia, but he has since bagged braces in back-to-back games in all competitions.

He is now the Gunners’ top scorer with 17 goals across all competitions and needs only two more to match his career-best tally with the club.

The Frenchman has proved the perfect foil for his teammates with his solid hold-up play and has now found the confidence in front of goal.

The Gunners will take on Villarreal in the semi-final stage of the Europa League. The club will see a reunion with former boss Unai Emery and graduate Francis Coquelin.