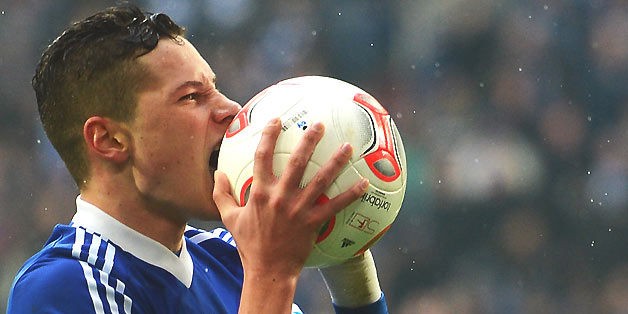 The transfer speculation surrounding German golden boy Julian Draxler has gone into overdrive recently, with Arsenal reportedly desperate to secure the signing of the 20-year-old this month.

Draxler is one of the best young players in the world, and true to form, Arsene Wenger is very interested in bringing yet another talented youth to North London.

The midfielder ruptured his tendon this month, and will be out until March; but this does not seem to have deterred Arsenal, with widespread rumours continuing to pop up concerning a potential deal.

Gunners defender and Draxler’s international colleague, Per Mertesacker, has spoken of his wish to see the attacker at the club,

“He is a great talent,” said the defender (quoted by the Evening Standard)

“He has already made a big impact at Schalke and in the German national team, despite his young age. He would be very welcome here. I’m excited to see what happens.”

German newspaper ‘Bild‘ have claimed that the main hurdle for the Gunners is that Draxler’s €45.5m buyout clause only becomes active in the summer, and Schalke would have full control over a winter transfer bid from Arsenal. 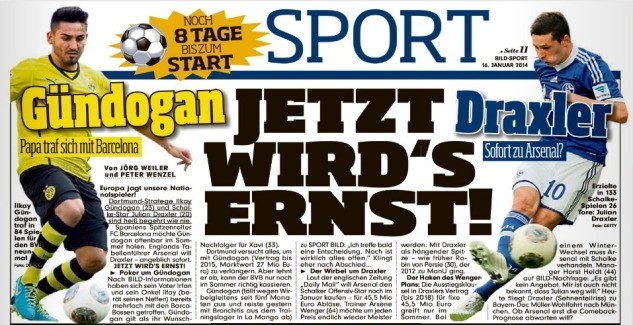 Schalke general manger Horst Heldt admitted to Bild that there would be little the club could do if Draxler’s buyout clause is met in the summer:

“We are still hopeful Julian (Draxler) is to stay on at our club,” said Heldt (via Sky Sports)

“However, there are certain arrangements we cannot change!”

With Arsenal going strong in this year’s highly competitive Premier League, one more crucial signing could well tip the balance in the Gunners favour.

With this in mind, Wenger may well test the waters in the coming weeks, but considering Draxler’s injury, and Schalke’s position of power this January, the Frenchman may save his best moves for the summer.

The 23-year-old’s father and uncle (who represent him) have had meetings with Barca officials, according to Bild, as the Spanish giants begin their search for a long-term replacement for aging midfielder Xavi.

‘Bild’ seem convinced that the German battler is leaving the Bundesliga, despite Borussia Dortmund’s efforts to extend his current contract, which is set to expire in 2015.

Yesterday we reported that Gundogan was close to revealing where his future lies, and that both Real Madrid and Manchester United had lodged bids for the player. Now it seems Barca have made real headway in the race for the star.

The signing of Gundogan should be the absolute priority for David Moyes, as we discussed in the ‘Transfer Lens’ yesterday, and despite the overtures of La Liga’s biggest and baddest, Manchester United should pull out all the stops in their bid to snap up the highly coveted midfield operator.

What do you think? Where will Gundogan go? Can Wenger snap up Draxler this month? Let me know in the comments below…