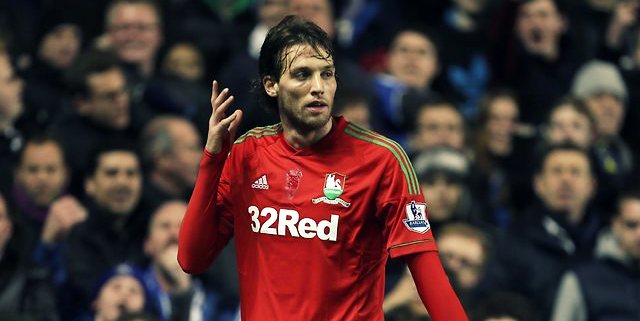 Arsenal face an uphill fight if they are going to complete a double swoop on Swansea City by signing centre back Ashley Williams and striker Michu.

Williams is a name which has been linked with Arsenal strongly over the last couple of months with Arsene Wenger thought to be keen on adding to his defensive reserves despite the Gunners have one of the best records last season, conceding just 37 goals from all games.

Michu has attracted a lot of attention for a superb first season in the Premier League which has seen him score 18 goals and dramatically increase his market value beyond the £2 million the club paid Rayo Vallecano for his services.

Williams will be the easier signing because their only competition for the defender seems to be coming from Liverpool.

Liverpool’s board seem to be making life difficult for Brendan Rodgers in pursuit of the Welsh defender with a report suggesting that the club will not bad a bid of over £10 million for a player nearing his 30s.

That means Arsenal are free to try and complete a good value deal and they can pay Swansea’s asking price for the defender without the worry of another club coming in and creating a bidding war in the process.

Michu is not going to be such a straight forward signing for several reasons.

He extended his initial contract earlier in the season, which now expires in the summer of 2016 and that is the biggest sign of commitment that any player can give their parent club.

He’s also got a market value which seems to have been placed in the £30 million bracket.

Swansea City boss Michael Laudrup hinted earlier in the season in a traditional pre-weekend press conference that any club that wanted Michu would have to pay at least double what Liverpool paid for Joe Allen, £15 million. He told reporters:

“I really don’t think clubs are going to pay so much money for him – We have the example of what Liverpool paid for Joe Allen, if they have to pay double for Michu there are few clubs who could afford that.”

Arsene Wenger has rarely broken the bank for any player and to pay £30 million for a striker after he’s spent one season in English football is a big risk for the Frenchman.

It would also push the accumulative fee of this double deal up towards the £40 million mark, which would be well over half of Arsenal’s summer transfer budget.

Wenger is a clever and shrewd manager who has never paid over the odds for players he doesn’t believe can transform the immediate fortunes of his side, and provide better options than he already has.

The pursuit of Williams is realistic and adding Michu onto the deal risks missing out on both players and that’s not a gamble Wenger would ever take.