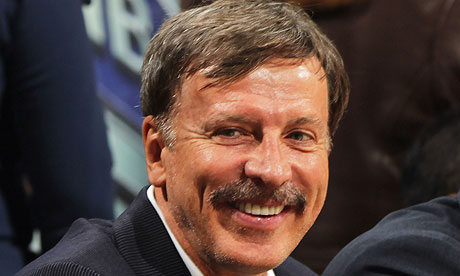 Arsenal’s majority share-holder Stan Kroenke, who is often known as Silent Stan, has expressed his strong desire to see Arsene Wenger managing at this iconic club for a long time.

In a wide ranging interview with the Daily Telegraph, Kroenke also spoke about the scenario behind the Luis Suarez-bid in the summer and also has expressed his delight after landing Mesut Ozil from Real Madrid.

He insisted that there were always resources available for Wenger but the manager had a certain plans from which he didn’t want to deviate, despite external pressures.

“Arsène knows how we feel, what our philosophy is, what we want to do and I feel like we are totally aligned. I think he wants to do it the exact same way as we do.”

“I really enjoy Arsène – very smart, very intelligent. He has an absolute view on how he runs that team and the club. He has earned that right. Don’t look for me to interfere with that. I have learnt over the years that sometimes owners try do that and it is not so good.”

Arsenal had tried to lure Suarez in the summer with two mega-bids but Liverpool were unwilling to sell their star striker.

“Look, Arsène [Wenger] had a view, our team had a view, they had a view and their view was, he wasn’t going anywhere.”

“I never saw them waver from it. I guess at some level there is a number that gets anybody out of anywhere but there was nothing within the realm of what we knew about that could have got him out of there.”

“There were people saying if he left there was nothing left. If people believe that, if those players believed that and John thought they believed that, then that is a real problem.”

While many perceive Ozil’s signature as a statement of intent from Arsenal, Kroenke is unwilling to see it that way.

He revealed that Wenger wanted the German international and the board backed the Frenchman with the money to conclude the deal.

“We weren’t there to make a statement. It’s absolutely not done for that. It was done purely because our manager views him as worth that money, he sees him as a player to help us compete and that meant we were happy to pay it.”

“What a great player. You can judge a lot by what players say when they leave and they weren’t happy when he left. Everything, from the way he conducted himself, since he’s been here has been top flight. We’re thrilled to have him.”

Wenger’s contract expires at the end of the season. Do you think the Frenchman will sign a long-term deal at Arsenal?