Chelsea will be looking to improve their home record with a positive result against Arsenal in the London Derby at Stamford Bridge on Sunday afternoon.

Their opponent Arsenal will be hoping to bounce back from the demoralizing defeat at the hands of Manchester City in their last Premier League encounter at the Emirates Stadium. 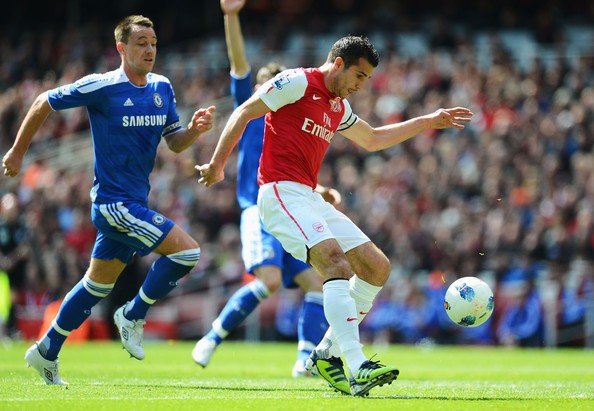 Chelsea have won just once in their last five home games under new interim manager Rafael Benitez as compared to four away triumph on the trot, hence the task to deliver at home is onerous for the Spaniard.

The Blues are now thirteen points behind pace setters Manchester United and cannot afford to lose further ground in terms of title race. The Londoners are 4/5 to win the match if you’re betting online with Ladbrokes.

Midfielder Oriol Romeu is only a long term absentee for Chelsea while skipper John Terry is fit and available for selection. However, whether Rafa would take the risk of starting with him in such a crucial game remains to be seen.

John Obi Mikel and Victor Moses have returned to Nigeria to participate in the African Cup of Nations. Demba Ba, the new signing from Newcastle United, has scored three goals already in all competitions is expected to start ahead of sulking Fernando Torres and he is a 4/1 bet to open the scoring for Chelsea.

Arsenal manager Arsene Wenger might have appeased the fans by stating his lofty ambitions in the transfer market and confirming positive news regarding Theo Walcott contract saga but the Frenchman must know a defeat at Stamford Bridge would leave them 11 points behind third placed Chelsea that may rule them out of the running for an automatic Champions League qualification spot.

However, the Gunners can take heart from the fact that they are undefeated in their last five away matches, as a result of which the North Londoners are at 3/1 odds to win the match.

Mikel Arteta who missed the last match against Manchester City will miss the action again due to calf injury and Wenger will have to rely on Abou Diaby or Francis Coquelin to do the job. Also, joining him in the treatment room for same problem is Tomas Rosicky who is sidelined for the match.

The Gunners will have central defender Laurent Koscielny back from a one-match suspension while forward Gervinho is away for international duty with Ivory Coast.

Chelsea had a chance to close the gap with Manchester City but they failed to capitalize on their games at hand. Benitez’s side are third in the table with 42 points, six behind City though are tied on same goal difference.

Arsenal’s stuttering season on the other hand has been defined by inconsistency throughout the campaign. The Gunners are lying sixth in the table with 34 points, six points behind fourth placed Tottenham with a game in hand.

In 151 league meetings between the two sides, Chelsea have won 45 times, Arsenal 61 while 45 games have been drawn. Since 2009/10, Chelsea haven’t had league doubles over Arsenal while in their last meeting, the Gunners were defeated at home courtesy Juan Mata’s winner in September.

Chelsea have a better scoring record against the Gunners in recent times having scored at least two goals in five of their last six home matches against them in all competitions and are 4/6 odds to score over 1.5 goals.

Both the clubs have identical records in terms of recent performances. In the last six games, both the London clubs have won four and lost once. While Arsenal’s only defeat came in their last game against Manchester City; their opponent Chelsea lost to Harry Redknapp’s Queens Park Rangers at home.

Arsenal are enjoying a good away record of late while Chelsea’s home record hasn’t been that impressive. Going with history, there hasn’t been a draw a Stamford Bridge since 2006 but this is a game that neither of the two clubs can afford to lose.